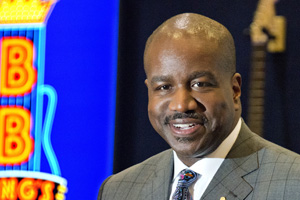 When Orlando Ashford began his career with Holland America Line (HAL) in December, he’d never sailed with the line and admits he was a cruise novice.

But while he may still be learning the ropes when it comes to the cruise industry, the line’s president and chief executive regards his unfamiliarity with the product as a positive.

Ashford, who has worked for Coca-Cola and Motorola’s human-resources teams, said he was questioning the way in which things had previously been done and, as the new man, got to “ask lots of silly questions”.

He added:“I always get asked how I’ve ended up in cruise. I know I’m not the cruise man. I don’t have a cruise background, but I am a people person.

“I’ve spent my career looking at organisations – either as a consultant or as an internal member of staff – trying to figure out how to maximise the impact of the people within an organisation to deliver incremental value to that organisation.”

Ashford said he believed in empowering staff and in the collective intelligence of a group rather than of individuals. Since taking up the role, he’s been encouraging staff to send him ideas to improve the business through a new scheme called the Innovations and Ideas Contest.

“I think there must be ways to simplify our business,” he said. “About a month ago, I launched the contest and emailed everyone asking for their thoughts and ideas, with the best getting $1,000.Within a day, I got 80 replies.

“That tells me that ideas were already there and the staff were just waiting to be asked. We ended up with 500 ideas.

“There are always big ideas within an organisation with 142 years of history and staff who have worked there for 10, 20 or even 40 years.

“My job is to tap into the expertise that exists and to bring the ideas up. If I can create an environment where we can tap into the collective intelligence of our staff, I think we will achieve great things. We will come up with lots of different ideas, thoughts and innovations.”

The winning idea was from a member of staff working on a ship in the guest-management team. She pitched an idea to create a training curriculum for onboard service and Ashford is now looking to introduce it across the business.

The second-best idea was a way to change the use of air-conditioning in a cabin to save HAL money.

Ashford added: “I can’t think about these things every day, but our staff live it on the ships, and they know what can improve things. The simple ones we will just do and the more complex ones we will invest in.

“I believe these smaller things will have a massive difference.

“Innovation is a selection of small adjustments – not just one big bang. The big bang may be more sexy and attractive, but often it’s fraught with risk and you can put your asset at risk.”

Ashford said he would be coming up with lots of ideas himself, but admitted that “eight out of 10 would be dumb”.

He insisted, however, that one or two of his ideas were going to be “really big” and come as a result of him having a different perspective, having “not grown up in the cruise industry”.

Ashford said the travel industry had a responsibility to do more than simply taking people to lovely places and offering them great service. He believes the industry helps to make the world a better place by allowing people to experience and understand cultures better.

“If we can get more people to engage and experience other cultures then, in a small way, we are improving the world,” he said.

“At a base level, we are saying that we’ll bring you on board and feed and entertain you. But in addition to that, I believe there’s a higher code that we serve and that we improve people’s perceptions of the world, which makes the world a better place.”

Ashford said there was an “awareness opportunity” with regard to cruise, which is where agents came into play. He believes the trade can help the line attract new-to-cruise customers and said HAL was always looking for ways to interact with the trade.

The line’s new ship, Koningsdam, which launches next year, will help attract new customers and widen the audience sailing with HAL, according to Ashford.