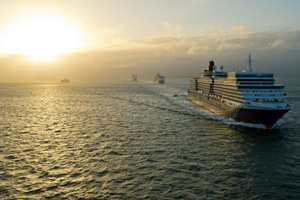 Cunard kicked off its 175th anniversary celebrations in the UK by having its three ships arrive in Southampton at the same time on Sunday.

The ships arrived in Southampton from their respective three-month world cruises.

They then set off on their summer season of transatlantic crossings, Mediterranean fly-cruises, Scandinavian and southern European sailings.

Commodore of the fleet, Christopher Rynd, said: “It is wonderful to be back in our homeport of Southampton.

“All three Queens have just completed their world cruises and now we are sailing out in procession, into the Solent.

“What a glorious way to start our 175 anniversary celebrations.”

The three vessels will meet again in Cunard’s original home of Liverpool on May 25 as part of a weekend of celebrations which is expected to attract up to one million spectators, according to local reports.