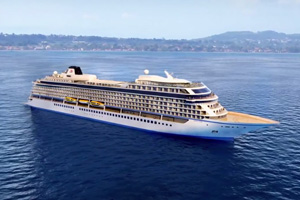 Viking Cruises could grow its fleet to 10 ocean vessels and more than 100 Longships within the next five years, and branch out into Asia and South America, according to its chairman.

The cruise line already has 63 Longships and has just launched its first ocean ship, Viking Star (pictured), with an official christening due to take place in Bergen on May 17.

But speaking onboard Viking Star, chairman Torstein Hagen said he planned to expand the fleet even further over the next five years, with three more ocean vessels already on order from Italian shipyard Fincantieri, and options for another two ships to follow.

He said: “We have options for up to six ocean ships. Then our idea is to hopefully build two ships a year every year thereafter.

“I think we have proved that we know exactly what the customers want. We placed orders when nobody else had the balls to do it. We are in a very strong financial position.”

Hagen also indicated the line would look to Asia – particularly Singapore and Hong Kong – and South America as possible destinations for the new ships, refusing to rule out the potential for a world cruise and even expedition cruises to Antarctica.

Viking Star is almost fully booked for its 2015 sailings, aside from some availability in December – with 60%-70% of those bookings coming from previous river cruise customers – and is currently at around 70% capacity for 2016.

Hagen added: “Ocean cruise lines do not manage to operate small ships economically. We have the benefit that we are a river cruise line, so we are cost-conscious and space-conscious.

“Our competitors won’t only be Oceania and Azamara, they will be other big cruise lines like Holland America Line. We have designed a ship that can offer this product at a very competitive price.”

The 930-passenger ship has been dubbed a ‘Venice class’, and includes one complimentary shore excursion at every port, no extra charges to dine at its two ‘alternative’ restaurants, and beer, wine and soft drinks with lunch and dinner.

UK managing director Wendy Atkin-Smith added: “It’s very exciting. We have got 63 river cruise ships already, so 100 by 2020 is not out of the question. We have been launching three or 10 or even 14 ships a year, so based on what we have done before, it’s doable.

“We would like to grow the UK market as much as we can, but we would like our plans to be a surprise to people. We’re very innovative and strong in marketing in the UK, although it’s not totally dependent on the UK market – it’s the US and Australia as well.”

Hagen ruled out expanding into new source markets beyond the US, UK and Australia, but remained confident that demand would be sufficient to meet the extended capacity.