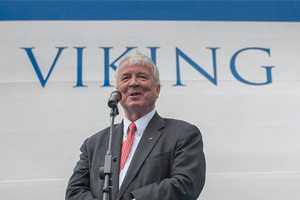 Viking Ocean Cruises has announced the launch of its third ocean ship, Viking Sky, will be postponed until spring 2017, but remains adamant the delay will not affect its ambitious expansion plans.

The cruise line’s first ocean ship, Viking Star, has completed her maiden voyage and is due to be christened in Bergen on May 17. A further two ships, Viking Sea and Viking Sky, were both due to begin sailing in 2016, with a fourth ship currently under construction.

But speaking onboard Viking Star, company chairman Torstein Hagen (pictured) said delays with the building of Holland America ship Koningsdam at the Italian shipyard Fincantieri had had a knock-on effect on the construction of one of Viking’s new vessels.

The third ship, which was due to launch next summer, will now be delayed until spring 2017, with any passengers who had already booked sailings given the option to transfer over to Viking Sea. Hagen confirmed that all three ships would share a similar design, following the pattern of the 930-passenger ‘Venice class’ ship Viking Star.

UK managing director Wendy Atkin-Smith dismissed worries that this could dampen the line’s plans for expansion. She said: “Hardly any of her sailings were on sale yet, because our 2016 offering is not for the full year yet.

“We will have some passengers booked on to the ship, but they will be transferred over. There’s as much damage limitation as possible.

“As far as I know, the Koningsdam ship that was being built is taking longer than predicted so it’s impacted on us. Everything depends on other factors, but it’s not going to affect the expansion plans at all.”

Hagen previously revealed hopes to grow the line’s fleet substantially to more than 100 Longships and 10 ocean ships – a significant increase from its current fleet of 63 river vessels and one ocean ship – within the next five years.