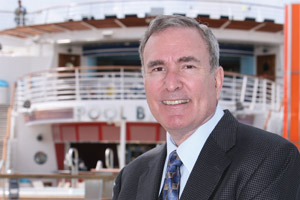 An order for a fourth ‘trailblazing’ Quantum-class ship was agreed overnight by Royal Caribbean Cruises.

The company already has Quantum of the Seas and Anthem of the Seas in operation and a third under construction.

The fourth 4,180-passenger vessel, to be built at the Meyer Werft yard in Germany, is due to be delivered in 2019, three years after Ovation of the Seas joins the Royal Caribbean International fleet.

“We have received a remarkable response from travel agent partners and travellers, and are thrilled that we’ll be able to deliver another revolutionary ship with our partners at Meyer Werft.”

No details were given about where the new ship will be deployed although Quantum and Ovation will sail from China and Anthem is operating its maiden season from Southampton this summer before moving to New York.

These figures do not include potential ship sales or additions that the company may elect to make in the future, Royal Caribbean Cruises pointed out.

“Royal Caribbean International is synonymous with adventure, and the icons and amenities on this ship will continue to challenge and expand guests’ expectations of the cruise experience.”