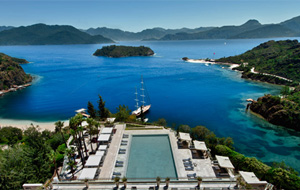 A surge in the value of sterling over the past month has sent resort costs in Turkey tumbling.

However, a rebound in the strength of the pound against the Turkish lira has given families almost 14% more travel cash in their pockets compared with last May, making prices in the Turkish resort lower than a year ago.

Paphos in Cyprus still remains the best value destination in the Eastern Mediterranean at £62.60 for a holiday basket of eight family travel essentials including meals and drinks – 12.4% lower than a year ago and over 16% cheaper than in Marmaris (£75.20).

The Turkish resort is no longer the most expensive option in the region, with Corfu at £75.46, despite the Greek island registering the biggest price fall of 14.6% this year.

Families who travel to Crete (£63.94) will find the island more than 15% cheaper than Corfu. A snack lunch and dinner for a family of four were cheapest of all on Crete, narrowly beating Paphos on the cost of eating out.

Although concerns have been voiced about the possible impact of Greece’s financial crisis on tourism, Post Office Travel Money says that local prices in Greek resorts have stayed low.

However, it advises holidaymakers to carry sufficient euros in cash to avoid uncertainty about the acceptance of credit cards at shops, restaurants and bars because these are not always as readily acceptable as might be expected.

Andrew Brown, of Post Office Travel Money, said: “At the beginning of the year the Turkish lira was the only European currency that was stronger than sterling. Now the position has reversed and the pound has powered ahead and gained over 17% in value against the lira since January.

“What’s more, there is mounting speculation from tour operators that after struggling for business in the early months of the year, prices could be set to fall in Turkey.

“If so, Turkey could be the destination to watch and resorts like Marmaris could emerge as great value choices for families this summer.”

Addressing the Greek situation, Brown added: “Where there is any doubt about whether restaurants and shops will accept payments on plastic and about the availability of ATMs for cash withdrawals, we advise people to budget carefully and change sufficient pounds into foreign currency before travel to ensure they have adequate funds for their stay.

“It always makes sense to carry some cash as a surprising number of bars, restaurants and petrol stations – in Turkey as well as Greece – do not accept credit or debit cards.

“It is always best to err on the safe side and carry a range of payment methods.”