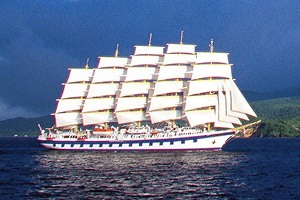 Tall ship sailing specialist Star Clippers has started building a new ship due to be launched in the summer of 2017.

The yet-to-be-named vessel – the line’s first new build since Royal Clipper in 2000 and the fourth in the fleet – will be the company’s biggest and most ambitious  to date, weighing in at 8,770 tons and capable of carrying 300 passengers.

The five-mast, square-rigged barque is a near replica of France II – commissioned in 1911 – and will replace Royal Clipper as the largest ship of its kind in the world. The estimated building cost is €100 million.

The cabin grades will include 34 suites with balconies and four owner’s suites. There will also be three swimming pools and a watersports platform. The ship will initially sail the company’s popular itineraries in the Mediterranean and Caribbean, and sales are expected to open in 2016.

“The UK market for our product has increased tremendously with sales more than doubling in the last three years,” said Star Clippers’ owner Mikael Krafft.

“We have a GSA, Fred. Olsen, but we also sell it through a huge number of agents. We only work with the travel trade and have no direct sales in the UK.

“Being a rather small cruise line, it’s much more economical for us to have agents as partners because they are highly specialised in marketing and selling.

“We are much happier getting fifty bookings through an agent than trying to take ten bookings directly. Big cruise companies might have a different opinion but for a small company it’s better.

“The UK has a very developed tour operator and agent network, unlike America. For us to form partnerships with big tour operators who have quite a few agents is very attainable.

“Increasing the size of our fleet won’t make any difference to our marketing policy. We receive a lot of word-of-mouth recommendations and have a very high repeat factor.

“It’s a fact that our guests usually book through a favourite agent and sometimes when they are on a cruise they ask us if they can stay another week. If we have space we always say yes and then send the commission to the agent. That way, you win that agent forever.’

Krafft said it was too early to determine what kind of incentives agents will be offered. “We have always had fam trips – it’s very important that agents see our ships and it’s the mainstay of our marketing. There will also be workshops.

“We have put a lot of effort into the design of this new ship. Our fleet is timeless and I hope they will operate for hundreds of years.”