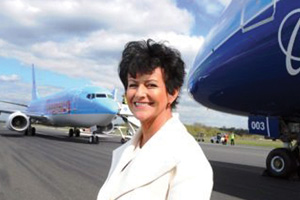 Tui airline boss Chris Browne has been recognised as a pioneer in the aviation industry by the UK’s leading air transport management university.

She received an honorary doctor of science degree from Cranfield University yesterday.

She was also instrumental in Thomson Airways’ decision to order 13 Boeing 787 Dreamliners as the airline became the first in the UK to fly the new generation aircraft.

Browne, Tui Aviation chief operating officer, said: “It is a huge honour to accept this honorary degree from Cranfield University and a pleasure to share my career experience with its students.

“The travel industry is an exciting sector to work in and I’ve had the opportunity to be involved in some amazing projects, including being the first UK airline to take delivery of the revolutionary 787 Dreamliner during my time as Thomson Airways managing director.

“There are many opportunities ahead for both Tui and for the travel industry as a whole and we need talented individuals such as Cranfield’s promising graduates.”

“Today’s celebration recognises the excellent achievements of those who have studied at Cranfield and those who are receiving honorary degrees for their outstanding contribution to business and society.”

Browne received an OBE in the 2013 New Year’s Honour’s list, an honorary Doctor of Science for management leadership from the University of Ulster in 2011 and membership into the British Travel Industry Hall of Fame in 2014.