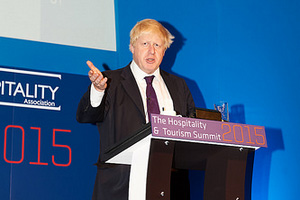 “We are the hospitality capital of the world,” London mayor Boris Johnson MP told the British Hospitality Association summit yesterday.

Speaking to 700 industry leaders at the Hospitality and Tourism Summit in west London, the mayor said: “My job is to keep making London the best place to come.”

He regaled the audience with an entertaining tale of how he spoke to author JK Rowling a few years ago, asking her why there were plans to build a Harry Potter-themed attraction in Orlando instead of London, where much of the story is set.

She told him Britain didn’t have the same service culture as the US or the same “gung-ho” approach to hospitality.

“I sat there like a stunned mullet,” he told the BHA summit. “I tried to argue with her but I was not able to deploy the killer stat that we have today.

“I am delighted to say the crushing rejoinder to critics of our hospitality is that we are now number one, the most-visited city.”

London received more than 17 million visitors last year and is predicted to attract 18.8 million in 2015.

He attributed London’s success to factors such as a falling crime rate, “colossal” investment in infrastructure, and the people, with “that culture of service”.

The mayor also pointed to advantages such as the number of top-rate museums and having the “best hospitality, catering and restaurants”.

London even scored better than Norfolk recently for its air quality, and he joked that Norfolk children will soon be bussed to the capital “to breathe our sweet air”.

Looking to the future, London tourism would benefit further from developments such as Crossrail, 24-hour tube services, and “Olympicopolis”, a cultural and heritage quarter planned for the 2012 Olympics site in East London.

Washington DC-based museum, The Smithsonian, the Victoria & Albert Museum and Sadler’s Wells, are among the high-profile institutions earmarked to build venues in the park.