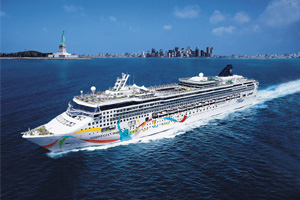 Norwegian Cruise Line has revealed it is building a team in Hong Kong, with a view to potentially entering the Asian market.

Norwegian’s president and chief operating officer, Andy Stuart, said the firm has hired Bill Harber, who is based in Hong Kong.

Harber has taken on the role of senior vice president and managing director for Asia, moving from Carnival Asia, where he was vice president of market development.

“This is a very big deal for us,” said Stuart.

“We have hired senior people to make sure that we do it in the right way. We are putting a team in place and building a plan that makes sense for the short term and also for the longer term.

“We would look at taking a ship to Asia for our regular distribution channels – Europe, North America, Australia. That is one opportunity and it is easier to do and quicker.

“The second opportunity is to take a ship out to Asia for Asians which would be more complicated. They would have different itineraries.

“A European doesn’t want to do a three day cruise in China, they would want to do a much longer one that covers all the hot spots in Asia.”