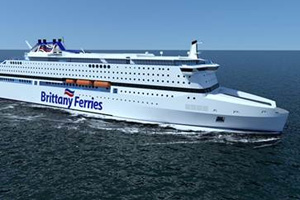 The grant will be used to install “scrubber” systems on three of its ships to reduce sulphur emissions.

But Brittany Ferries says the money is not enough, with the overall cost for fitting scrubbers to its fleet of six ships calculated at £63 million.

Brittany Ferries is one of five European ferry companies that have won EU grants totalling €48 million to fit scrubbers to their vessels.

The EU last year ordered fuel sulphur levels to be reduced from 3.5% to 0.1% by last January, on the back of recommendations by The International Maritime Organisation.

A spokesman told Portsmouth News: “We are one among a number of ferry companies including DFDS and Stena Line to have received this grant.

“It is a contribution towards the capital cost of fitting scrubbers to three of our ships this coming winter – Pont Aven, Armorique and Mont St Michel – and we have received nothing for the three ships already done.

“The grant falls far short of the cost of fitting scrubbers to six ships at a cost of €90 million.

“It is only some 8% of the total. It helps but falls far short of the incremental cost we have had to bear.”