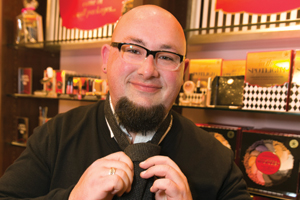 You couldn’t find a greater fan of the US than Darren, who simply can’t get enough of the destination. So it was a dream come true for him to become a Travel Weekly Cover Star and visit one of the places on his bucket list, Boston

Q. What inspired you to enter the Travel Weekly Cover Stars competition?
A. My colleague Gemma went on the California trip last year and that really inspired me. Boston was on my bucket list of places to visit, so when I saw the destination prize, it was an easy decision to enter. I have been to New York three times and Florida a few times – I am a big fan of the US. I love the country and the history, it’s always the first place I think of for my holidays.

Q. As a fan of the US, what do you most love about the destination?
A. It’s the differences you can experience between the states. You can go to New York for the hustle and bustle or a small rural town such as Lynchburg in Tennessee. Boston is like New York’s younger brother, just not as commercial. The people in the US are so friendly and they have always got a story to tell – and I like to listen to them.

Q. Did your trip to Massachusetts meet your expectations?
A. It met and exceeded my expectations; I am already planning a trip back next year! If I had to choose, Boston was my highlight. But Cape Cod was also fantastic. For anybody who loves the US and a typical city break, there is so much history in Boston and such a choice of things to do, from the Skywalk Observatory to Beacon Hill. The hotel we stayed in, the Omni Parker House, is where the Kennedys stay when they are in town and is the home of the Boston cream pie. It’s an old hotel and steeped in history. It’s also supposed to be haunted – but we didn’t experience anything!

Q. What was Cape Cod like?
A. I didn’t know much about it before I went, but it is ideal for matching up with Boston. It’s only a short drive from Boston but it is so different – rural and picturesque. We did a tour of the dunes in a 4×4 vehicle. We also visited Provincetown and Plimoth Plantation, where we boarded the Mayflower II, a replica of the 17th-century ship that brought pilgrims from England.

Q. What was it like having a photoshoot and makeover?
A. I was quite apprehensive at first but it was all part of the experience. We were made to feel so relaxed during the photoshoot. It was at the heritage museum in Cape Cod. Once the process started, it was plain sailing. It was quite funny going to the hairdresser when you don’t have any hair – but they trimmed my beard!

Q. Have you managed to sell a trip to Massachusetts since your return from the trip?
A. Yes! I sold a trip to Boston and Cape Cod for friends who wanted a trip to the US. They have just come back from doing five nights in Boston, five nights in Cape Cod and six nights in Washington. They stayed in the same hotels as me in Boston and in Cape Cod – the Omni Parker House and Cape Codder Resort & Spa – that I recommended to them. They have just come back and they said it was faultless. Having recommended it, I was so happy that they said that – it’s a great feeling. Agents can do a certain amount of research, but to have the whole personal experience is hands-down the best way to do it.

Visiting some of Boston’s top sights has whetted Darren Robinson’s appetite for a return trip next year.

As well as the Skywalk Observatory and the fun historical look around the city on Boston’s Duck Tour, Darren got the opportunity to see the outside of Harvard University and Fenway Park baseball stadium, where the Boston Red Sox play.

“The observatory gave us 360-degree panoramic views of the whole city,” he said.

“The Duck Tour was brilliant, the guide was funny and knowledgeable, and it was great to be able to take in some other sights.

“There is so much to do, you can easily spend four to six nights in Boston and be busy every day. There’s also the Freedom Trail, which you can follow and walk around Boston and Beacon Hill.

“We didn’t take in many museums on this trip, but we did stop at the John F Kennedy Presidential Library and Museum, which was amazing. It’s the official Kennedy museum and definitely worth a visit.”

1. Offer Boston as a twin-centre with Cape Cod, depending on how much time your client has. If they have more than four or five nights, it is worth booking a multi-centre holiday.

2. Offer Boston as an alternative to New York. It’s like its younger brother and less commercial!

3. There is plenty to do at all times of the year, but the area is particularly colourful in the autumn.