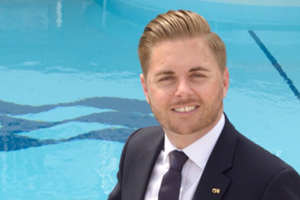 The announcement comes as part of a major restructure of the commercial teams for P&O Cruises and Cunard less than a week after the shock announcement that Carnival UK’s chief commercial officer Gerard Tempest was to exit the business after two years.

Ludlow’s new role as senior vice-president of sales and marketing for P&O Cruises will also see him take responsibility for sales support, guest insight and the digital teams of both P&O Cruises and Cunard.

Cunard is now recruiting for the role of senior vice-president of sales and marketing.

As part of the restructure, sales and distribution director Chris Truscott will be leaving the business.

Head of partner sales, Jeremy McKenna, will lead the agency sales team for both brands, reporting directly to Ludlow in the interim period until the new Cunard role is appointed.

Carnival UK chief executive, David Noyes, said that bringing sales and marketing together in one role would help Cunard and P&O Cruises create more momentum for the brands.

“I am delighted to appoint Paul to this critical role. Paul’s 15 years of experience within our company makes him an ideal fit to lead the sales and marketing teams for P&O Cruises to ensure sustained growth of the brand.

“Chris Truscott leaves this business in a significantly better position than the one he joined. He should be proud of what he has achieved and the relationships he has built.”

Ludlow said: “Following the launch of Britannia in March, which positioned P&O Cruises at the forefront of the nation’s mind, there has never been a more exciting time for the company.

“The potential for the industry as a whole is vast and I am determined, through giving a seamless, exemplary guest experience, working closely with our travel agent partners, to develop this growth to the maximum for P&O Cruises.”

During his time at Princess Cruises, Ludlow oversaw the creation of an individual sales team and commercial operation for the brand. He led the team which launched Royal Princess, named by the Duchess of Cambridge, and also oversaw the launch of new travel agent tools such as the recently-launched booking portal OneSource.