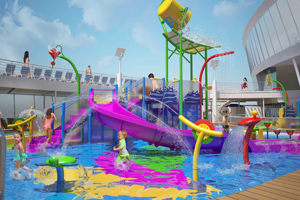 Royal Caribbean International has announced that an interactive water park will feature on new ship Harmony of the Seas.

The ship, which is currently being built at the Saint Nazaire shipyard in France, will feature an aqua park called the Splashaway Bay.

The new addition will join Ultimate Abyss, a 10-storey slide, and The Perfect Storm trio of waterslides, called Supercell, Typhoon and Cyclone.

Splashaway Bay will be suitable for children and toddlers and will have sea creature water cannons, winding slides, a drench bucket and a climbing frame.

Ultimate Abyss will be the tallest slide at sea and feature a 100-ft plunge.