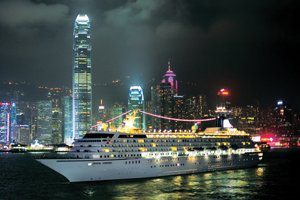 Crystal Cruises has confirmed an order for a second aircraft just weeks after announcing a massive expansion plan.

Since making the announcement, the line’s president and chief executive officer insisted that there would be more news to come and during Crystal’s 24th annual agent sales gala she announced that a second aircraft had been ordered.

Details of the type of plane haven’t been revealed, although Rodriguez did confirm that it would be another 7-series style aircraft.

She said it would be used to offer shorter 14-day luxury holidays around the world, while its sister aircraft (the Dreamliner) will offer longer 28-day trips.

The combined cost of the two aircraft has been reported as $110.5 million.

Rodriguez didn’t rule out further expansion and said she believed it was likely that the company would move to roll out more products across all of the new brands – Crystal Luxury Air, Crystal River Cruises and Crystal Yacht.

She previously hinted at further yachts and said that any of additions to the yacht brand would involve new builds rather than revamping existing vessels.