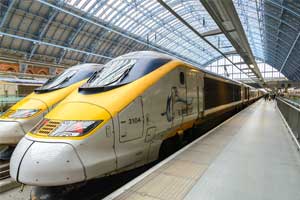 Eurostar carried more than one million passengers in one month for the first time in July.

The total was up by 5.1% over the same month last year and came despite ongoing migrant disruption to the Channel Tunnel.

The high-speed passenger rail service cited the introduction of a new connection between London and the south of France and ticket sales for core destinations at record levels as reasons for the increase.

More than 100,000 tickets have been sold to date on the new Marseille service which was launched on May 1.

Eurostar chief executive, Nicolas Petrovic, said: “We have seen unprecedented demand over the summer months as customers are taking advantage of our frequent services and new routes.

“With passenger numbers increasing year-on-year, we are looking forward to the arrival of our new trains. The combination of more seats, superior comfort and state-of-the art design is set to transform the travel experience.”

More than 148,000 passengers are expected to travel on Eurostar trains over the August bank holiday weekend.

Friday will be the busiest day for departures from the UK, with more than 38,000 travelling.

A 13-day ticket sale will run from August 27 to September 8 for travel from late September until mid-December, including 140,000 seats available at £32 one way for standard travel from London, Ashford or Ebbsfleet to Paris, Brussels, Lille or Calais.