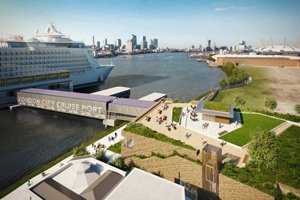 Plans for a new London cruise terminal at Greenwich have been given the thumbs up by mayor Boris Johnson.

The development, which was given approval by Greenwich Council last month, will also include 477 homes, a skills academy, restaurants, cafes and bars.

The London City Cruise Port at Enderby Wharf will be capable of handling 55 cruise ships a year when it becomes operational in 2017.

Ships carrying up to 1,600 passengers will be able to use the terminal.

Almost 500 full-time jobs will be created with the development.

Local residents had voiced concerns over the environmental impact of ships using the terminal, with fears of increased pollution, noise and traffic.

But London’s deputy mayor for planning, Sir Edward Lister, told the local Wharf newspaper: “We have worked with the local authority and the developer to ensure the new terminal and surrounding infrastructure will meet the needs of thousands of tourists coming to the city each year.”

A statement from cruise port developers said: “We welcome the backing of the mayor of London for the development of London City Cruise Port .

“The decision will allow us to drive forward our target programme, taking the next steps to bringing the new cruise terminal to the Thames.

“We will communicate further information on the project as it becomes available.”