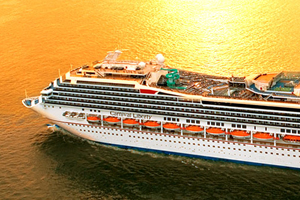 Carnival Cruise Line is investigating the cause of an engine room fire on the ship Carnival Liberty in the Caribbean yesterday.

The fire broke out late on Monday morning in the engine room of the ship which was docked in St Thomas in the US Virgin Islands, the US Coast Guard reported.

There were no injuries to passengers or crew, Carnival said in a statement. The ship was carrying 3,346 passengers and 1,150 crew.

The Coast Guard responded to the fire and the cause is being investigated. The ship’s fire extinguishing system put out the blaze, Carnival said.

Passengers were taken to a hotel in St. Thomas, where they stayed in a reception area.

The Coast Guard gave permission for passengers to reboard the ship at around 8pm local time, Carnival said.

The line said last night: “A team of experts is in the process of conducting a deeper technical assessment of the affected engine room that is expected to be completed in the morning.

“At this time it has not been determined when the ship will depart St Thomas.”

A fire broke out on Royal Caribbean International’s Freedom of the Seas in July as it arrived in Falmouth, Jamaica. No passengers were hurt, but one crew member suffered first-degree burns.