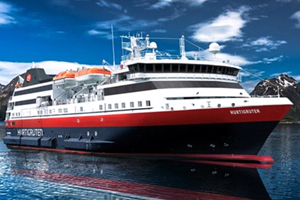 Hurtigruten’s new ship will be named MS Spitsbergen after the largest island in the Svalbard Archipelago.

The name was chosen following a competition in which more than 15,000 suggestions were submitted from all over the world.

The winner of the naming contest, who will be the captain’s guest on a special sailing of MS Spitsbergen, is Erlend Baldersheim from the village of Baldersheim, near Bergen.

The 320-passenger vessel will initially replace MS Midnatsol on Hurtigruten’s traditional Norwegian coastal route when it sails to Antarctica in autumn 2016.

It is expected that the new addition to the fleet will alternate between the coastal route and polar expeditions.

MS Spitsbergen adds greater flexibility to Hurtigruten’s global operations as the company now operates two ships running voyages around the poles as well as 11 ships along the Norwegian coast.

Hurtigruten now offers trips around Greenland and Iceland, as well as around Spitsbergen. In the extreme south, Hurtigruten sails from South America to the waters around Antarctica.

Chief executive, Daniel Skjeldam, said: “We find MS Spitsbergen to be a very appropriate name as it ties together our history and present-day Hurtigruten.

“As early as in 1896, Hurtigruten founder and tourism entrepreneur Richard With built a hotel in Spitsbergen and established ‘the sport route’ with sailings from Hammerfest to Spitsbergen, operated by steamship DS Lofoten.

“Having built on this heritage, today we are world leading operator of nature-based experiences along the Norwegian coast, in the waters around Antarctica and in the Arctic.“

He added: “We have been virtually flooded with suggestions. In addition to posts on the web, we have received letters and postcards, telephones and e-mails and text messages. We have even forthright been stopped on the street.

“Most proposals of course come from Norway, from continental Europe, especially Germany, and from the UK. But suggestions also came in from the US, Australia, New Zealand and from Asian countries.”