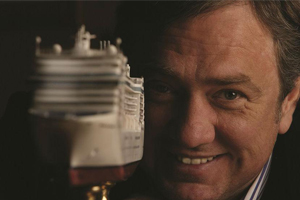 A number of challenges threaten to undermine the future growth of Europe’s cruise industry unless urgent action is taken, the boss of Clia Europe has warned.

The cruise trade body’s chairman, Pierfrancesco Vago (MSC Cruises), cautioned that the sector’s growth had slowed while calling for ports to be expanded.

“While the long-term trend remains positive, the future could be much brighter,” he told the opening session of the Seatrade Europe show in Hamburg.

“A number of critical constraints to the industry’s further growth need urgent addressing if we want to ensure that the cruise industry will continue to be a solid contributor to Europe’s economy.

“Many European ports are struggling to keep up with the cruise industry’s rapid growth.

“Upgrading port infrastructure throughout Europe is a necessary investment that would open new routes and destinations, and further boost the industry’s economic impact on land.

“We also need to make sure that more European ports have adequate facilities allowing cruise ships to discharge wastewater onshore.”

He said: “The way certain pieces of EU legislation are applied across Europe can be compared to a patchwork quilt, which is affecting our ability to optimise our ships’ operational efficiency.

“The EU sulphur directive is a prime example. While cruise lines invest in expensive, open-loop scrubber technology to comply with the directive, in remains unclear in which ports they will be able to use it. EU member states need to focus on aligning the application of European legislation all their ports to avoid this confusion.”

Speaking about the need to allow more third-country tourists to visit Europe, Mr von Heereman continued: “Europe is among the world’s most restrictive regions in terms of visa requirements for foreign nationals, and is subsequently losing six million potential tourists every year at a crucial time of economic recovery.

“The proposed EU visa code reform is a vital start to improving tourism flows in Europe.

“But the EU institutions must swiftly adopt and implement the new legislation, or risk depriving the EU of even more precious tourism revenues when it needs them most.”

Vago called on cruise companies, ports, authorities and other tourism stakeholders to keep working together in order to find solutions to these and other challenges.

“Clia advocates a multi-stakeholder, consensus-driven approach that starts with dialogue among all the parties concerned,” he said.

Europe’s cruise industry delivered total economic output €40.2 billion, up 2% from the previous year, according to Clia. In addition, 29 out of 31 ocean-going cruise ships due to be delivered by 2018 are being built in European shipyards.