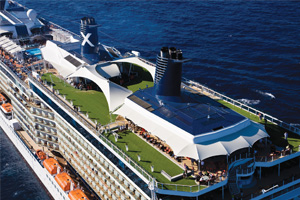 Celebrity Cruises has launched a new brand campaign as it looks to entice more people into taking a cruise holiday.

The cruise line’s new campaign ‘A Different View’ will be unveiled in a new 90-second short film that will premiere on Channel 4 on Sunday night during hit show Homeland.

Shorter standalone clips of 30 and 10 seconds have been created to air on Channel 4, More4 and Film 4 throughout October and November.

It is the first TV brand campaign Celebrity has released since operating as a standalone business.

The film was showcased to the press and key trade partners at an event in London last night.

Speaking at the event, Jo Rzymowska, managing director of the line, said the campaign would ensure Celebrity Cruises was “front of mind to those who will make bookings in the wave period”.

“This isn’t necessarily about making bookings instantly,” she said. “This is about brand messaging and getting people who haven’t cruised before to see a different view of what it is like to take a cruise holiday.

“It will also mean that when they do come around to making a cruise that they’re more likely to think of Celebrity Cruises.”

She said the content of the campaign was being shared with trade partners who were being encouraged to use it when selling a Celebrity Cruise to customers.

Rzymowska added: “Our new brand film really highlights everything that is unique about our holidays in a very evocative and inspiring way.

“Everything that is seen in our new film is through the eyes and encounters of real guests onboard and presents a different view of cruising that we know only Celebrity Cruises offers.

“The stunning views and landscapes merge with the award-winning onboard experiences. We are working with our agent partners to ensure that they can make the most of it, and maximise the content across their digital channels.”

The film was shot onboard Celebrity Silhouette during a sailing in the Mediterranean and the footage was created using real customers onboard the ship.

To support the film, the brand is also running a dedicated agent competition on its trade partner Facebook page at Facebook.com/CelebrityTravelAgents where agents can win Waitrose and John Lewis gift vouchers. The competition will begin on Monday.