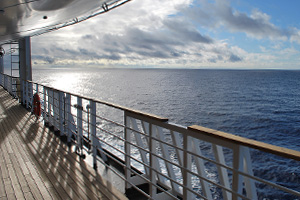 A previously-announced slump in UK cruise passengers last year has been re-confirmed in newly-published figures for the global industry.

But UK numbers dropped to 1.6 million from 1.7 million a year earlier, largely due to reduced cruise ship capacity away from UK ports and other popular destinations such as the Mediterranean

The cruise industry trade association was quick to point out that the UK will have returned to growth in a “landmark year” in 2015 thanks to the introduction of ships including P&O Cruises’ Britannia, Royal Caribbean International’s Anthem of the Seas, Princess Cruises’ Royal Princess and Cruise & Maritime Voyages’ Magellan.

“Longer-term trends demonstrate that the UK and Ireland market remains resilient; the annual average increase in passenger numbers since the start of the economic downturn in 2008 has been 3.3% and, over the past quarter century, there has been ten-fold growth,” a Clia spokesman said.

“The UK and Ireland continues to have one of Europe’s highest rates of market penetration for cruise holidays.”

The Clia global figures issued from the US reveal total contributions from the cruise industry rose from $117 billion in 2013 to $119.9 billion last year.

North America remains the largest source market, accounting for 55% or 12.2 million cruise passengers in 2014, followed by Europe which claimed 29% or 6.4 million passengers.

Other regions of the world, including Australia, China, Singapore, Japan and South America, accounted for the remaining 16% or 3.5 million passengers.

Cruise tourism in Asia is growing at double-digit rates, both in capacity and as a passenger source market, according to the study.

The number of ships deployed in the region between 2013 and 2015 grew at a 10% compound annual growth rate, and the volume of cruises and voyages within and through Asia increased 11%. Passenger capacity in Asia increased 20%, with Chinas being the main driver of growth.

“We’ve enjoyed progressive growth over the last 30 years, driven initially by demand from North America, which expanded to Europe, Australia and now Asia. As a result, the cruise industry impacts the global economy generating jobs, income and business growth in all regions of the world.

“The potential for new cruise passenger growth is huge,” she added.

“Apart from North America and Europe, other regions of the world account for nearly 85% of the world’s population, yet represent only 16% of cruisers. That reflects a tremendous opportunity for the cruise industry.

“Asia is a prime example of the cruise industry’s growth opportunity. Our industry is bringing more cruise ship visits to Asia and the volume of cruise passengers sourced from Asia for cruise tourism worldwide nearly doubled since 2012.”