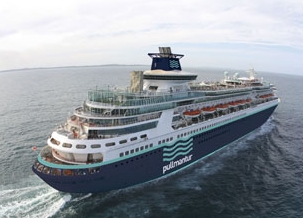 The shine was taken off Royal Caribbean Cruises’ better-than-expected third quarter results due to troubles at Spanish offshoot Pullmantur.

The company disclosed today that it had suffered impairment charges of almost $400 million related to Pullmantur including a reduction in the value of some ships in its fleet.

“Unfortunately, the economic outlook in Latin America has deteriorated further in recent months and, as a result, the brand is refocusing on its core market of Spain,” Royal Caribbean said.

“These factors triggered the company to record a non-cash impairment charge of $399.3 million, primarily related to its goodwill, its trademark and trade names and a reduction in the carrying value of select vessels in the Pullmantur fleet.

“As the company right-sizes the brand, restructuring and related charges of approximately $5 to $10 million associated with the new strategy will be booked in future quarters.”

The cruise group’s chairman and chief executive, Richard Fain, said: “The right-sizing of the Pullmantur fleet will better balance supply with demand for the brand in the Spanish market.

“These changes should put Pullmantur on a more successful course for the future.”

Royal Caribbean reported net profits up by more than $100 million for the three months to September 30 to $628.1 million from $492.9 million in the same period last year, driven by “strong momentum” in the Caribbean over the summer. Total carryings rose from 1.3 million to 1.4 million year-on-year.

The growth of the Asia-Pacific region, including Quantum of the Seas sailing in China, is expected to boost earnings in the typically lighter shoulder season.

The addition of new capacity, with Anthem of the Seas joining the fleet, efforts to drive incremental onboard revenue, and a continued focus on cost efficiencies will also contribute to a stronger end of the year, according to the company.

Chief financial officer, Jason Liberty, said: “As we have reiterated throughout the year, we remain ahead on both pricing and volume versus same time last year.

“While Latin America is stressing yields in the fourth quarter, strong year-over-year pricing in the Caribbean, and the addition of capacity in China, will solidify this fourth quarter as the best in our company’s history.”

The parent company of brands such as Royal Caribbean International, Celebrity Cruises and Azamara Club Cruises said it was experiencing good early booking trends for 2016.

“Management is excited by the 2016 introduction of Harmony of the Seas starting in Europe next summer and adding Ovation of the Seas to its Chinese platform to take advantage of the strong reception this class of ships has received there,” the company said.

“While still early in the booking cycle, the view for 2016 is encouraging, and the company expects another year of solid yield and earnings growth.”