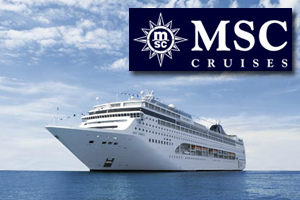 MSC Cruises today stepped up plans for its new cruise operation in China by signing up a Chinese celebrity chef to oversee dining options and menus.

Hong Kong-born Jereme Leung, renowned as one of the world’s finest Asian cooks, is famed for his pioneering style which unites modern Chinese cuisine with traditional provincial food.

His new role is one of a number of initiatives planned for the upcoming joint venture between MSC Cruises and China’s leading tour operation CAISSA Touristic Group.

The Italian line announced last month that MSC Lirica (pictured) will be based in Shanghai from May 2016 to serve the Chinese home market.

Lirica is due to reach its new homeport of Shanghai on May 1, 2016, after a 60-day voyage from Rio de Janeiro via Barcelona, Marseille, Genoa and Dubai.

The ship will then sail mostly three and four-day itineraries, calling South Korea and Japan, although longer options will be available.

The company is also to introduce ‘Cruise Ambassadors’ on board – staff dedicated to ensuring that Chinese passengers unfamiliar with cruise make the most of the ship’s facilities.

Cruise Ambassadors will chaperone passengers at all key moments, acting as social host, fixer, guide and information point as required.

Cruise Ambassadors, who will speak Mandarin as well as English, will provide around-the-clock access to information and assistance.

Additionally, MSC Lirica will be staffed by an industry-leading ratio of Mandarin-speaking personnel, with as many as 80% in some departments, according to the line.

Staff will be recruited and trained through Chinese schools of excellence, while managers will also undergo on-the-job training aboard other MSC Cruises ships.

MSC Cruises chief executive, Gianni Onorato, said: “We’re really excited about having Jereme Leung at our side in this venture.

“He has a deep knowledge of Asian cuisines that extends well beyond China’s borders, which is why he’s also instrumental in the development and delivery of other on-board menus and dining concepts, including the Kaito sushi restaurant; the 20-hour-a-day Chinese and international buffet and La Bussola, which will serve dishes from across Asia and around the world, plus a Chinese tea bar.”

Leung will give the ship’s chefs specialised training in the traditional cooking methods that are his trademark, while front-of-house staff will also undergo specific training around the cuisine and clientele they will serve.

Onorato added that the new Cruise Ambassadors service was created meet every need of passengers on MSC Lirica, and to ensure they fully benefit from the entire range of relaxation, discovery and entertainment options.

“It is bold innovations like the Cruise Ambassadors that we believe will really make the difference to our Chinese guests, and keep them coming back to MSC Lirica,” Onorato said.

Other highlights revealed include a large casino with Chinese favourites and classics, plus a private baccarat and sic bo room. An extensive range of boutiques carrying leading high-end European brands, including but not limited to, Gucci, Bulgari, Longines and Tag Heuer will feature on board.

CAISSA Touristic president, Chen Xiaobing, said: “What makes this partnership stand out from other traditional agreements between China-based tour agencies and cruise lines is the emphasis that will be placed on the training of the entire on board staff to ensure guests receive the best-in-class MSC Cruises’ experience and service, as well as the degree of the adaptation of the ship’s hardware and software, like facilities renovation, service design and operation and more, to fit the customs and tastes of Chinese guests it is designed to serve.”