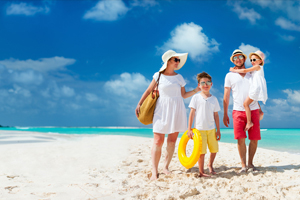 MPs have called for an immediate review of the policy that outlaws term-time absence other than in “exceptional” circumstances.

The ban on term-time holidays, which has led to thousands of parents being fined, is “blatantly unfair” and is undermining the importance of family life, a parliamentary debate on the measures heard yesterday.

The debate also highlighted the negative impact on the UK tourist industry, which has lost business during term time as a result of the restrictions, the Guardian reported.

MPs heard that the Cornish economy had lost an estimated £44 million in 2014 as a result of the policy. Inevitably, peak season prices have been driven higher to make up for those losses.

Leading the debate, Steve Double, Conservative MP for St Austell and Newquay, said: “Education is clearly vitally important. But it is not the only important thing in a child’s upbringing.

“While I support the aim of getting children to attend school regularly I fundamentally disagree that telling parents when they can and cannot take their children on holiday is the job of the state.

“Every child is unique and it should be for parents to decide what is right and best.”

Double said the restrictions meant people who work in tourist areas were unable to take family holidays, as were lower- and even middle-income families who could not afford to go on holiday during peak periods.

“The message this policy sends out is that being in the classroom is more important than being with your family,” he said. “Something I fundamentally cannot support.”

The debate was triggered after a petition on the issue gathered more than 120,000 signatures in a month.

Before the rules were introduced in 2013, headteachers had discretion to grant up to two weeks’ term-time leave to pupils with good attendance records.

Now, if a parent takes a child out of school without the authority of the headteacher, they can be fined £60 per child by the local authority, rising to £120 if unpaid after three weeks.

Parent John Platt, from the Isle of Wight, successfully had a fine overturned after arguing that the unauthorised absence of his daughter to go on holiday to Florida in term time did not mean she failed to attend school regularly.

The Local Government Association (LGA), representing 370 councils and boroughs across the country, has also called for changes to the policy.

Official statistics show the new policy has led to a drop in the number of state school pupils taking authorised holidays in exceptional circumstances, but the proportion of those taking unauthorised holidays has barely changed, according to the LGA.

“Children’s education is treated with the upmost seriousness but it is clear that the current system does not always favour families, especially those that are struggling to meet the demands of modern life or have unconventional work commitments,” Roy Perry, chairman of the LGA’s children and young people committee, told the newspaper.

A Department for Education spokesman said it was a myth that missing school even for a short time was harmless to a child’s education.

“Our evidence shows missing the equivalent of just one week a year from school can mean a child is significantly less likely to achieve good GCSE grades, having a lasting effect on their life chances.

“Heads and teachers are now firmly back in charge of their classrooms, and most recent figures show we have made real progress – with 200,000 fewer pupils regularly missing school compared with five years ago.”