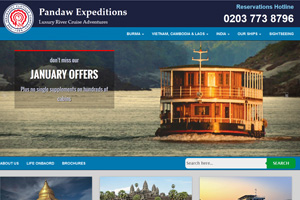 The line, which specialises in Asia, has always accommodated families; however, it is set to introduce dedicated family-focused cruises next year on four departures.

The first is the Burma to Mandalay Pagan Packet itinerary departing on either July 30 or December 24. The seven-day itinerary leads in at £1,070.

The line is also making the July 31 departure of its Halong Bay and the Red River cruise child-friendly, as well as the seven-night Classic Mekong cruise which will set sail on August 6.

Shore excursions will be tailored to families, with options such as cycling tours and cooking lessons. There will also be movie nights onboard.

Children aged under four travel free if sleeping in a cot. The price for children between four and 18-years is half of an adult fare.

During WTM the line also announced a new ship sailing on the Irrawaddy. The Kha Byoo Pandaw will join the fleet next February as its 14th vessel.

The ship will have nine staterooms and will sail on the seven-night Mandalay Pagan Packet cruise, leading in at £1,250.