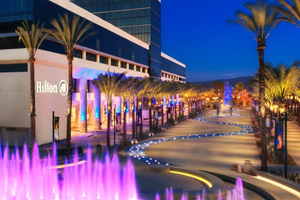 Hilton is reported to have been fined $25,000 in the US for obstructing a probe into allegations that it blocked guests’ ability to use their own Wi-Fi hotspots unless they paid a $500 fee at a hotel in California.

Regulator, the Federal Communications Commission, said it had received complaints about other Hilton properties, but its requests for information on the company’s wi-fi policies had been ignored for nearly a year.

The FCC has warned the chain, which operates several brands, including Hilton, Conrad, DoubleTree, Embassy Suites and Waldorf Astoria, that it could face a “significantly higher fine for any continued obstruction or delay.”

A Hilton spokesman said that at no time had the Hilton Anaheim (pictured) blocked Wi-Fi “to collect a fee.” However, he could not say whether it had blocked a guest’s Wi-Fi for other reasons, the Times reported.

Marriott was fined $600,000 by the FCC last year for Wi-Fi blocking, prompting the chain to petition the regulator to change the law, saying that conference attendees at its properties could launch cyber attacks on its network. It backed down later.

Wi-Fi blocking is illegal under the US Communications Act, which prohibits “willful or malicious interference” with lawful radio communications.