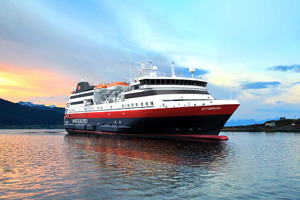 Four of Hurtigruten’s Norwegian coastal voyage ships are to be refurbished next year.

The line also plans to operate newly-acquired vessel MS Spitbergen (pictured) as an additional ship on the Norwegian coastal route next summer following a revamp.

MS Polarlys will be the first ship to be refurbished in January 2016, during a 22-day programme of round the clock works.

The vessels will be fitted with a modern Scandinavian interior, reflecting the coastal landscapes of the Arctic, according to the company.

All public areas of the ships will see changes with the reception areas, cafes, bistros and the aft deck to be renovated.

Facilities on MS Spitsbergen will be similar to those already offered across the fleet but will additionally offer suites with a private balcony and full length windows.

For the first few months of operation, MS Spitsbergen will plot a parallel route alongside MS Lofoten. However, MS Spitsbergen will not stop overnight, leaving more time to spend in selected ports during the daylight hours. All of the regular excursions such as rib boat rides, whale watching, horse-riding and sea eagle safaris will be offered.

It will also be the latest ship to offer Hurtigruten’s new Coastal Expedition concept, with a lecture programme, regular hikes and expedition team on-board. The new offering, which was announced earlier this year, will be provided on three other coastal ships from January 1, 2016.

Prices for MS Spitsbergen will be the same as for the rest of the coastal fleet with the Classic Voyage North starting at £968 per person for a May 8 departure. Flights and transfers start at an additional £395pp.

A 12-page brochure with details of the ship’s inaugural season has been produced to support the launch.

MS Spitsbergen will then run the regular stopping itinerary along the Norwegian coast from September 2016 ii place of MS Midnatsol which is transferring to operate in Antarctica.

Chief executive Daniel Skjeldam said: “We are a first mover company and we are now reinventing the Hurtigruten experience.

“By combining tradition, innovation and sustainability, we aim to ensure the position as world leader in nature-based explorer travels in polar waters.”

Hurtigruten UK managing director, Magnus Zetterberg, said: “The interior will reflect the breath-taking coastal landscapes we sail past. We have made it stylish and yet unpretentious.

“The colours are earthy and from the coast and the sea. Many of the materials are natural, such as wood, slate and leather.”