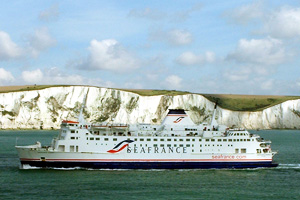 This was up by 4% year-on-year and was the first time that two years of consecutive growth had been recorded since the mid-1990s.

The number of travellers using the Channel tunnel was also up, by 3% to a record 21 million in 2014.

The figures released by the Department for Transport suggest demand for travel to and from the Continent remains strong despite competition from budget airlines.

Dover-Calais remains the busiest route, with 10.8 million passengers, although increasing numbers are travelling between Dover and Dunkirk.

This is now the second most popular international ferry route out of the UK, with more than 2.5 million passengers last year.

Portsmouth-Caen was the third most popular route, accounting for 967,000 passengers in 2014.

But the overall number of people using ferries is down over the past 10 years with Dover-Calais carryings of more than 14 million achieved in 2003 and total passengers using short sea routes at 26.5 million.