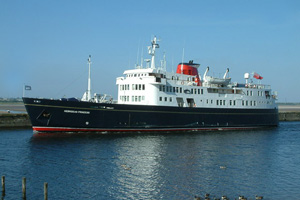 Hebridean Island Cruises’ ship Hebridean Princess is to be sold for £2.9 million and leased back to parent company All Leisure Holidays.

A deal has been agreed with a new company called HP Shipping, wholly owned by s syndicate of private investors led by All Leisure chairman Roger Allard.

Proceeds from the deal for the 50-passenger luxury vessel – which has been used by the Queen for holidays – will strengthen the group’s balance sheet and improve liquidity.

All Leisure Group said: “The independent directors believe that the operations and performance of this division will not be affected by the proposed transaction, and also note that all scheduled cruises of the division are expected to go ahead as planned.”

“The group would benefit from an immediate cash injection of £3 million, before expenses, and will retain the operational division and the associated cash flows of the profitable Hebridean Island Cruises business.”

The deal is subject to approval by shareholders at a general meeting on November 30.

It comes against a backdrop of increased competition in the cruise sector with new ships and capacity.

“Consequently the industry is seeing increased levels of price competition which negatively affects the profitability of the group,” All Leisure said.

“Geo-political events continue to have an adverse impact on the business, affecting the appetite of tourists to travel to a number of destinations and limiting the group’s ability to visit certain destinations.

“Furthermore, it was necessary in the first half of the year to put all three of the group’s cruise vessels into dry dock, with a resulting annual capital expenditure cost of approximately £4.5 million and a loss of revenue relating to the lost cruising time of approximately £2.5 million.

“The group’s cash flows are highly seasonal, with cash at its lowest point in December to February, and at its highest in the period June to July.

“Against this backdrop, the board has reviewed the funding position of the group with a view to strengthening the company’s balance sheet and improving liquidity.

“The board has explored various options over the last six months and has determined that the proposed transaction is the best option available to the group.”