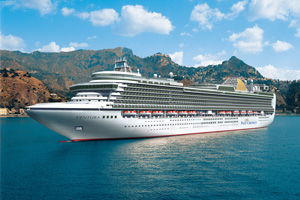 P&O Cruises has announced plans to expand the culinary offering of its ‘Food Heroes’ to two more ships.

Christopher Edgington, marketing director for the line, said the afternoon tea created by French pastry chef Lanlard had proved a massive success on board new ship Britannia. The tea, served in The Epicurean restaurant is often booked up well in advance and sold out before sailings commence.

Edgington said that by the end of the month the experience will be added on board Ventura (pictured) and Azura.

Speaking at the line’s media dinner in London last night, Edgington also hinted at plans to step up the brands entertainment offering, and to create ‘Entertainment Heroes’. The first of these is actor Jonathan Wilkes.

He also confirmed a number of celebrities who will take part in the TV show Battlechefs showing on channel Watch next year, including former JLS boyband star JB Gill, Olympic athlete Greg Rutherford,  Susannah Constantine (one half of Trinny and Susannah), and Boyzone star Keith Duffy.

The line’s boss Paul Ludlow said there had been “unprecedented demand for P&O Cruises this year”.

He added: “It’s been a great year and in the coming weeks and months we will be sharing more about how we plan on cementing our brand values. We believe we have the winning formula for our brand and we’re going to push forward with that.”