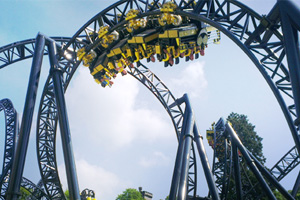 The owner of Alton Towers disclosed today that business had slumped at the Staffordshire park where five people were seriously injured in a rollercoaster crash in June.

In a trading update this morning for the 47 weeks to November 21, Merlin Entertainments said that “trading at Alton Towers has remained significantly below the prior year”.

The company added: “However, as expected, year-on-year declines have narrowed in recent weeks, reflecting the temporary change in product and customer mix during the Halloween period”.

Two women had to have their legs amputated and three others suffered bad injuries on the Smiler ride (pictured) when their carriage collided with another which had come to a halt on the track. A company investigation earlier found that the accident was the result of human error.

“Outside of the UK day-visit market, the accommodation offerings across the estate continue to perform well, as do our two continental European resorts,” the group said.

Merlin reported strong revenue growth at its Legoland parks while growth in revenue at its Midway Attractions division remained at lower levels due to “the continuation of challenging markets in London and Hong Kong, partly offset by strong performances in the rest of Asia”.

“The new attractions and accommodation opened across the group this year, and in 2014, have continued to perform well. The outlook for new business development more broadly remains positive,” the company added.

“Whilst some significant trading days remain, including peak season trading for our attractions in Australia and New Zealand, Merlin expects to report full year results in line with current expectations, with underlying profit before tax broadly in line with the 2014 result.”