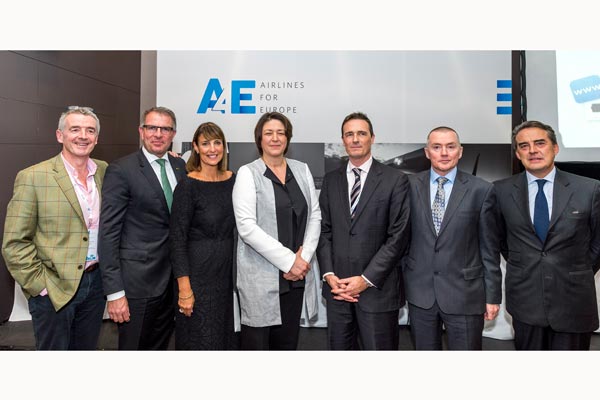 The bosses of Europe’s five largest low-cost and network airlines are putting historic rivalry aside to join forces in a powerful new lobbying group.

Collectively, the group carries more than 460 million passengers a year, accounting for half of the continent’s passenger journeys, operating more than 2,100 aircraft and generating €85 billion in turnover.

Yesterday’s launch came on the eve of an EU aviation summit in Amsterdam, with other carriers expected to join.

The aim is to unite European airlines to take forward changes they claim will increase their competitiveness and result in lower fares and more choice for passengers.

The formation of the group comes a few weeks after the presentation of the EU Aviation Strategy, with the summit being the first major meeting of policymakers and the industry.

A4E also pledged to campaign on at least three measures:

A4E says it is opposed to unreasonable taxes on aviation – these damage the economy and jobs. It described the hike in the Italian passenger tax as a “disappointing step in the wrong direction” and it will damage the Italian economy.

The group said: “The focus must be on concrete and measurable actions that support European airlines and their customers by providing more flights and lower fares. All unreasonable taxes on aviation activity should be removed.”

A4E will also work on several key principles and action items which should underpin EU aviation policy. The most important of these is the commitment to safety and ensuring that safety standards are developed on the basis of a risk-based scientific assessment.

The five chief executives added: “Today marks the beginning of a new era for European airlines. With the endorsement of the five largest airline groups in Europe, A4E will be a powerful vehicle to address the industry’s issues.

“For the first time, low-cost and network carriers are creating an association to support the adoption of a new European Aviation Strategy. We also call on all airlines in Europe to join us and make our voice even more powerful.”

Thomas Reynaert was named as managing director of A4E, joining from United Technologies where he ran its European government relations office.

“His wide experience in the aviation sector and his strong management background will help us to meet our challenges in Brussels.,” A4E said.