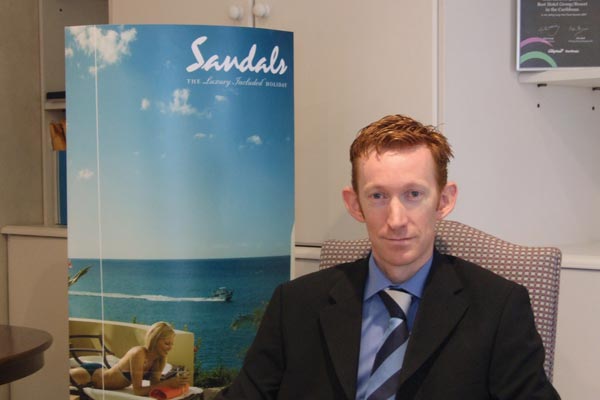 Sandals’ UK managing director hopes 2016 is the year the resort operator takes its relationship with agents to a new level. Juliet Dennis reports

You can do all the marketing in the world but if those on the front line are not promoting the right message, you are wasting money.”

That’s the message from Sandals’ Karl Thompson. The Caribbean resort operator’s UK managing director likes to lead by example and regularly attends its agent events, often on board the company’s yacht, Lady Sandals.

Thompson, who joined the company in 2007 and became managing director in 2008, said: “I love to hear from agents and it’s important to meet them because they are the people ultimately selling our product.”

To get the year off to a flying start the company is launching a campaign to create six agent ambassadors. This will be followed in the spring by the opening of its first high street shop, in Kensington, where it plans to entertain and train agent partners.

Sandals Resorts International, founded in 1981, is one of the largest resort operators in the Caribbean and is the parent company of Sandals Resorts, Beaches Resorts and Grand Pineapple Beach Resorts.

The UK is its third-biggest market, after the US and Canada, but there is potential to grow this further, according to Thompson, whose background prior to Sandals included more than 10 years at MyTravel at brands including tour operator Tradewinds.

UK revenue has grown 50% in the past two years and January sales are up 25% compared with the same month in 2015.

With UK sales growth now outstripping those in the US and Canada, Britain is without doubt a key focus for the brand.

According to Thompson, the year has started well.

“We have had a tremendous start to the year,” he said.

“I can’t put my finger on it but there are multiple factors, including an opportunity for people to do business with us that have not done so much before.

“Virgin Holidays’ business is also expanding with us and we are growing our business with other tour operators as well.”

Thompson estimates Sandals is currently “outperforming” in the long-haul market, with current security concerns about certain destinations working in the Caribbean’s favour.

“The fact some regions have struggled has benefited us as the Caribbean is seen as safe and an aspirational region of the world,” he said. “We are doing well but it’s on the back of all the activity we are doing with operators and agents.”

The latest Sandals Ambassador campaign aims to take the operator’s relationship and sales with agents to “the next level”.

Already the share of its business coming from agents is growing, said Thompson.

“We work with agents on many different levels, from training to fam trips. Our sales team is constantly on the road looking for new agents to come on board.

“But this is about taking it that step further. It’s about working closely with agents and taking business to the next level.”

The ambassador campaign will give six winning agents the role of brand ambassador for a year – each focused on different Luxury Included product elements – and the chance to report on a twin-centre trip to Sandals Grande Antigua and Beaches Turks & Caicos.

Thompson said: “For us this is a different way of trying to engage with agents. We want to make it more fun and get agents involved in a more structured way that is business-focused, rather than just giving away a holiday.”

He hopes the new campaign will drive sales and awareness of what he calls the brand’s “stand‑out” products: weddings, gourmet dining, sports/activity, island‑hopping, family and ‘Lovenest’ suites.

“These are the areas where we believe we stand out from our competitors,” he said. “For example, we reintroduced island-hopping last year and it’s really taken off.”

This year will see new water villas open at Sandals Royal Caribbean Resort & Private Island in Jamaica and renovation of its Montego Bay resort in Negril.

By 2017, 200 rooms will have been added to Sandals Barbados, doubling the resort’s size.

Thompson is keen to heighten trade awareness of the operator’s family-focused Beaches product.

“Beaches is not as well-known as Sandals,” said Thompson. “We want to promote it more to families and groups.”

There are two Beaches properties in Jamaica and one in Turks & Caicos, but Thompson hinted the brand could expand into destinations including Antigua or Barbados.

“We are under-represented in the Caribbean,” added Thompson.

As a result, the company is featuring Beaches in this year’s TV campaign, which runs until March.

Thompson said this was part of the reason an agent call-to-action was initially missing from its advertising.

“We did a hybrid TV ad combining Sandals and Beaches, which we have not done for 15 years, and because of that we had more logos on the ad and the call-to-action dropped off without anyone realising,” said Thompson.

“We rectified it as soon as we realised.”

Thompson describes the Luxury Travel Store as a one-off “concept store” to bring its brand to life.

He said: “It will showcase our product and help agents and customers alike. We have strong brand awareness but we have to continually focus on educating customers and trade on what we are about and the quality of product. It’s difficult to do that in a television or press ad.”

Thompson said there had been no “noticeable level of concern” from the trade about Sandals’ plan to open its own 5,000sq ft travel shop.

“We are not out to drive direct business aggressively,” he said. “It’s really a concept store for people to touch and feel our product.”