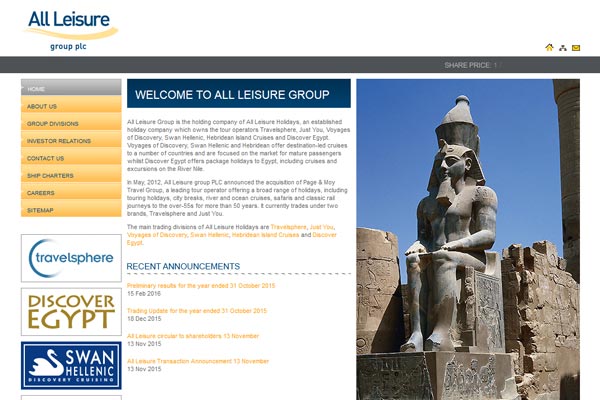 All Leisure Group saw a return to profit last year, but says it is actively pursuing de-listing from the AIM stick market due to costs associated with being public.

The parent of Travelsphere, Swan Hellenic and Voyages of Discovery, said there were limited benefits of remaining on AIM.

It described trading as challenging but reported overall profit after tax in the year ending October 31 of £500,000, compared to a £7.5 million loss the previous year.

Revenue stood at £127.3 million, up , down from £138.9 million, due to dry-dock periods for Voyager and Minerva, together with lower numbers of tours passengers.

Average Revenue per Passenger was £2,360, down from £2,410 in 2014, the decline driven by the cruise division due to the dry dock periods for both of All Leisure’s main vessels.

Underlying operating profit/loss before movement in the provision for derivative contracts was a loss of £1.5 million. Underlying Operating profit was reported of £1.1 million.

Chairman Roger Allard said: “The board is actively considering delisting from the AIM market.

“It is mindful of the on-going costs of remaining as a publicly quoted company and the limited current and potential benefits available to the company. A further announcement will be made in due course.”

Allard added: “I am delighted to report that the All Leisure Group closed the year with an overall Profit after Taxation of £0.5 million, compared to a loss of £7.5 million in the prior year.

“Trading conditions are however expected to remain very challenging, especially in view of the escalating conflict in the Middle East and recent acts of terrorism, and the effect these events may have on consumers’ propensity to travel.”

All Leisure said it had saved £900,000 in the year though cost savings but its cash reserve fell to £10.2 million due to higher capital expenditure and losses on foreign currency.

On November 30, 2015, the group agreed a sale and leaseback deal for Hebridean Princess vessel, raising £3 million cash to improve liquidity.

Bookings to the Eastern Mediterranean and North Africa, notably Egypt, Turkey and Cyprus were heavily impacted by the geo-political issues in the Middle East, while the Russian tours programme was cancelled due to restrictive new visa regulations that deterred passengers from booking, the firm reported.

Popular Black Sea cruise itineraries to Crimea remain off limits due to the ongoing political situation in the region.