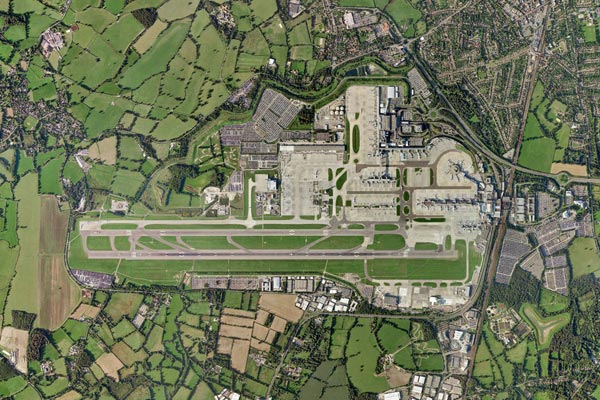 Gatwick will today pledge to become the UK’s greenest airport in the latest salvo in its battle against Heathrow to win the right to build a new runway.

A plan to cut carbon emissions dramatically over the coming decade is to be unveiled.

A ‘pollution tsar’ has been appointed responsible for improving air quality during the airport’s proposed £7.1 billion project to build a second runway.

Gatwick also plans financial penalties for airlines to encourage them to use electric vehicles around the airfield. This is likely to be extended to passenger buses.

The move is designed to push Gatwick ahead of its rival Heathrow in the race to construct another runway in the south-east.

Simon Sturgis, an expert in carbon emissions analysis who has advised the government on green policy, is to be named as chief environmental consultant at Gatwick

Sturgis, head of Sturgis Carbon Profiling, will oversee Gatwick’s building project, including a new runway, terminal buildings and roads, to ensure that carbon emissions are kept to a minimum.

He told The Times: “Most people concentrate on carbon emissions from turning off lights and reducing heating but what we will be looking at is how to minimise the carbon footprint through construction.

“How much recycled content can be used in the building process and what is the life cycle of that building?”

Gatwick has an existing target to reduce carbon emissions by 50% by 2020 compared with 1990. It now wants to become the “UK’s leading low-carbon airport by 2025”.

Chief executive, Stewart Wingate, said: “Gatwick has ambitious expansion plans and these are matched by equally ambitious plans to develop the airport in the most environmentally responsible way possible.”