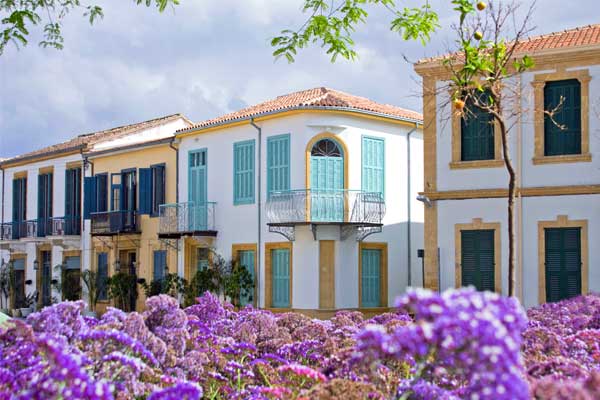 Nicosia, the only divided capital in the world, is blooming again, finds Katie McGonagle

There’s barely a sound from behind the pastel-hued facades and pretty, wrought iron balconies of the restored houses in Nicosia’s Old Town. Perhaps it’s because it’s early on a Sunday morning, or because the sun is already shining on these colourful, characterful properties, but the narrow, cobbled streets of the Chrysaliniotissa area feel more like a charming little village than the heart of a capital city.

It’s so tranquil, in fact, that it’s hard to believe we’re just a few feet from the demarcation line that has split the island into the Republic of Cyprus to the south and Turkish Cypriot territory to the north since 1974.

Although the very idea of a border sounds at odds with the otherwise warm and welcoming atmosphere of this holiday island, this is just part of everyday life in the capital. Its younger population has never known any different – so much so that the city’s vibrant nightlife carries on, somewhat surreally, right up to the edge of the buffer zone. There’s even a satirically named restaurant called Berlin Wall, where the till is labelled ‘Checkpoint Charlie’, right by the piled-high sandbags and border guards of the Ledra Street crossing point.

This is a side of Cyprus few Brits see, despite flocking to the beach resorts in their thousands each year. Nicosia’s rich cultural life, lively bars and exciting culinary scene are an interesting counterpoint to the sleepy villages and party-hard coastal towns elsewhere on the island, whether visitors go just for a day trip from classic hotspots or swap their usual resort holiday for a city stay instead.

Nicosia’s youthful, energetic vibe belies its long history: with roots in the ancient town of Ledra and historic landmarks left behind by centuries of settlers – not least the Venetians, who erected the distinctive star-shaped city walls in the 16th century – the capital has a strong sense of heritage.

Yet its Old Town has had a breath of fresh air over the past few years, as economic pressures have seen locals drift away from the newer, more expensive side of town to revitalise the quirkier bars and restaurants of its older districts. These pedestrianised streets and town squares are full of shoppers browsing or sipping coffee by day, and positively buzz with life at night as diners spill out of restaurants to eat al fresco and bars play live music until the early hours.

As in the rest of Cyprus, you’re unlikely to find a meal that doesn’t pack a serious flavour punch. But among the real standout eateries are The Market Company, where the exposed brick interiors and Manhattan loft-like decor are as enticing as the menu, and the country-kitchen vibe of Diosmos & Kanela (which means ‘Mint & Cinnamon’), on pedestrian thoroughfare Onasagorou, offering homely surroundings for its simple‑yet‑scrumptious fare.

For afters, Patio Cocktail Bar has a particularly funky vibe, with DJs and the biggest wine fridge I’ve ever seen. It’s just one of several late-night venues proving this city has more of a social life than it’s given credit for.

That quirky vibe continues in the creative uses for its more unusual venues. Famagusta Gate was one of three entrances to the city during the period of Venetian rule, but today it’s home to ever-changing art and photography exhibitions, making the most of the cool, shaded space and the sense of character that comes with it.

Nearby, the Centre of Visual Arts & Research is one of the most exciting developments in the city’s cultural scene: this 19th-century building has been thoughtfully restored as part of a UN project to revitalise parts of the walled city that were in decline, on both sides of the border.

Owned by the not-for-profit Severis Foundation, the centre opened in September 2014 with an outstanding collection of artworks and artefacts documenting modern Cypriot history. Not only are the exhibits lively and interesting – from the uniform of the island’s first British governor to more than 1,500 paintings, newspaper clippings and satirical cartoons about life in Cyprus – but this project also actively promotes reconciliation between the communities, with every panel written in Greek, English and Turkish, attracting school groups and visitors from the north. Entry is €5 and the audio guide is €3, and it’s worth stopping at next-door Balthazar Café and Roof Garden to recharge with a delightfully sinful weekend brunch or afternoon tea.

Things are looking up in the east of the city too, where the Loukia & Michael Zampelas Art Museum celebrates the island’s contemporary artists. Converted from the old family home – even the original window shutters were kept and turned into a design feature – it houses a 1,000-strong collection built up by the art-loving couple over the past 50 years. Three-quarters of the works are by Cypriot artists, displayed alongside pieces by the likes of Picasso and Salvador Dali. Entry costs €6.

There are a few other sights worth ticking off on any city tour.

For an immediate overview of the city, the 11th-floor observatory at the Shacolas Tower, above Debenhams department store, is the place to go. Its €2 entrance fee is more than justified by the unbeatable panoramic views from this lofty spot, covering every angle of the city. A handy touchscreen highlights the key monuments on view, and there’s an easy-to-follow potted history of the city.

For those who fancy delving a little deeper, the Leventis Municipal Museum should be the first port of call. Free to enter, it’s a well-presented history of the island and its settlers, from Richard the Lionheart and the French Lusignan dynasty via 15th‑century Venetian queen Caterina Cornaro to the Ottomans and, later, the British. It’s not all dry factual detail, however: there are plenty of everyday objects, ceramics, folk art and local handicrafts on display to bring the island to life.

Other attractions focus on more‑specific interests. The Cyprus Archaeological Museum sheds light on the island’s role at the heart of the Greek and Roman worlds (entry €4.50). The House of Kornesios, the restored home of a Cypriot tax collector for the Ottomans, offers an interesting look at the fusion of these two cultures. And the Byzantine Museum traces the Greek Orthodox custom of religious icon-painting (entry €4).

Visitors who have had their fill of galleries and museums can find other relaxing ways to absorb Nicosia’s many historical influences.

Built in the 16th century, the Hamam Omerye has its origins in the Ottoman Empire, but I can’t say the city’s shifting power struggles were at the forefront of my mind as I got ready for a body scrub and massage.

With the slap of the scrubbing mitt against the sole of my feet, the splish-splash of warm water, and the gentle kneading of the masseuse, it was pretty much all I could do to stay awake and watch the light fading through little star-like openings in the domed roof. Aside from its relaxing rituals, the hammam itself is a sight to behold, with its ornate interior, heavy blue fabrics accented with gold, and authentic cups of apple tea and trays of sultanas, bringing all the exoticism of the Orient to the Cypriot capital.

This city is the cultural and geographical heart of the island, so whether visitors want to delve into its complex history or simply amble through the streets to soak up the atmosphere, they won’t feel they really know Cyprus until they’ve spent some time in its most exciting city.

This former family home feels surprisingly modern, with a fresh feel thanks to its refurbishment three years ago, despite having only opened in 2000. Its 57 rooms are contemporary and more spacious than you’d expect from such a central location, with a pretty courtyard in the middle of the hotel offering a quiet spot to read or relax in the warmer months. It has a basic gym, a coffee lounge and an atmospheric wine bar, but its standout feature is fine-dining restaurant 59 Knives, where meals are exquisitely prepared and presented.

Cyplon offers a three-night B&B stay at the four-star Nicosia City Centre Hotel from £345, including Gatwick-Larnaca flights, baggage and private transfers, for travel on May 15. cyplon.co.uk

Sunvil can arrange three nights at The Classic Hotel, with BA flights from Heathrow, private transfers and B&B accommodation, from £577 based on two sharing. sunvil.co.uk