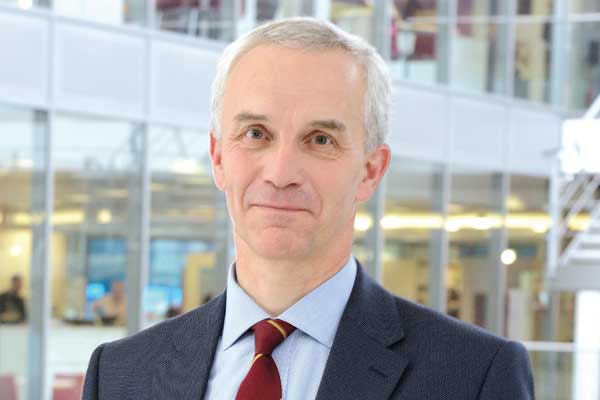 The chief executive of Cunard and P&O Cruises tells Lucy Huxley how herbs, TV shows and a bigger sales team are all part of the operator’s strategy to fend off rivals

Noyes excitedly shows me a computerised herb-growing chamber full of fresh pea shoots. It’s a small version of what could be installed on all his cruise ships soon.

“Previously on a transatlantic sailing, we could only use fresh herbs in our dishes for the first two days of the sailing,” he says. “With this device, our chefs could use fresh herbs for the entire voyage.”

The herb chamber is one of the high-tech devices in Carnival UK’s new ‘Development Kitchen’ across the road from its offices in Southampton.

I watch mesmerised as head innovation chef Craig Dunn experiments making olive oil into ice cream, poaches eggs at 63 degrees for an hour to get an even consistency, and creates transparent oblaten wafers flavoured with dill pollen. Heston Blumenthal, eat your heart out.

Beneath the kitchen, the sprawling building, known as ‘The Academy’, houses four performance studios that replicate the stages on all P&O Cruises and Cunard Line ships, a voice studio and a huge wardrobe department.

It’s a significant investment for Carnival UK, but one Noyes feels is essential if the company is to continue to exceed the expectations of its guests.

“It’s our centre of excellence for dining and entertainment, two key pillars at the heart of every cruise,” he says. “This place not only keeps us up to date with the latest fashions and tastes, but also helps us get the balance between the new and the familiar just right.”

Noyes acknowledges the opening of The Academy could not have come at a more critical time, with competition in the ex-UK cruise market hotting up.

Asked how P&O Cruises and Cunard could stay one step ahead, with rival lines Thomson Cruises, Norwegian Cruise Line and MSC Cruises announcing plans to sail from UK shores in the near future, Noyes says: “Why do you think I wanted to show you this place?

“What’s happening in the UK market is very exciting – it increases awareness of cruising, which is a good thing. The more we can make cruising a mainstream holiday for the British market the better, and some other lines are bringing in products that are going to attract different people to cruise.

“It’s one of the reasons we developed The Academy as we cannot stand still. We must continue to innovate.”

P&O Cruises’ tie-up with Ant and Dec’s Saturday Night Takeaway and the line’s forthcoming Battlechefs show, to be aired on the Watch channel, are two examples of how the line is trying to appeal to a new market.

Noyes reveals that in the hour after the first Saturday Night Takeaway show aired last week, visitors to its website increased by 60%. Social media activity went wild and the line also saw an increase in bookings, although he declines to give figures.

Battlechefs, a show in which celebrities compete in a cook-off for the ship’s captain under the watchful eye of Marco Pierre‑White, a P&O Cruises ‘Food Hero’, airs on April 4 and will be repeated, giving the line 80 hours of TV exposure.

“We deliberately chose the Watch channel (which also airs Australian Masterchef) and not BBC or ITV because it’s completely aimed towards newcomers to cruise,” Noyes says. “It showcases Britannia, our cookery school, our Food Heroes and our amazing ports of call. Battlechefs and Saturday Night Takeaway are both great television and we expect them to have a halo effect for us.”

Noyes is pleased with the year so far. He declines to give details but says the lines were able to end their wave booking period promotions early and launch a ‘Savour More Moments’ campaign to coincide with Saturday Night Takeaway “as a consequence of good demand”.

A year ago, Noyes had speculated that it would be impossible to get prices up, but he hints that he may have achieved it this year. And he insists that his brands had not had to get embroiled in any discounting, something agents reported was creeping back into the sector.

“We see prices moving, and the market going up and down, and we make a judgement if we need to do anything based on demand,” he adds. “But we haven’t had to do any special sales, and that would be a sign that we are very happy with wave this year. Demand has been good and both brands have achieved the volumes and prices that we wanted them to.”

Noyes says Cunard has seen good demand from North America for all three of its product ranges – transatlantic sailings, fly‑cruises and itineraries from the UK to northern Europe – and had not had to change any itineraries in light of fears over terrorist attacks.

Noyes says the current restructure of the P&O and Cunard sales team, from 31 to 42 staff, is part of a greater investment.

A 30-day consultation period for all existing staff ended this week. “We are doing this in the right and caring way,” adds Noyes. It’s very important that we take our people with us. It’s not just a case of replacing people.

“The end goal is to have more people, upskilled to give individual attention to our agent partners, with a big emphasis on training so we can really help them sell P&O and Cunard. It’s all about delivering a better service – a tailored approach where we can respond more quickly. That’s not to say we haven’t been doing a good job, but we can never stand still.”

Noyes says the company’s  ‘Adopt An Agent’ initiative, introduced last year, is still operating in some areas but has been scrapped in others where it “wasn’t working” as well.

On deliberately splitting the P&O Cruises and Cunard management teams, Noyes says it will help to “give a clear focus to each brand”.