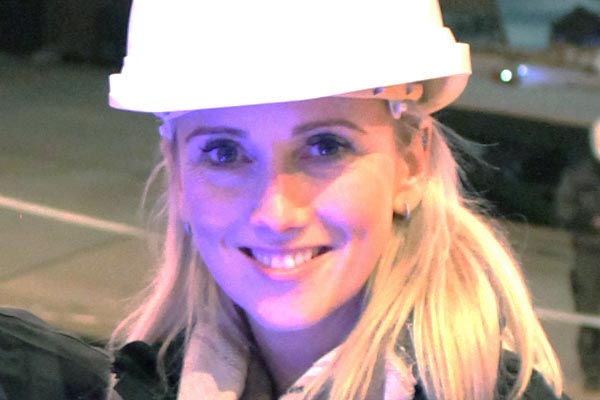 With her dancing shoes on her feet, Sharon Fleming is preparing to take part in Portadown’s Strictly Come Charity challenge. At the end of April she’ll step out in front of hundreds to raise money for two charities, Portadown Cares and Action Cancer

Q: How did you get involved in Strictly Come Charity?

A: One of my customers suggested it to me, but I said no because I didn’t really want to do it – I’m not a dancer. The next thing I know, the charity is sending me all the registration forms and all of the information – she’d gone ahead and signed me up without me agreeing or knowing.

Obviously I couldn’t say no at that point and it is for charity, which is brilliant, and it’s already proving to be lots of fun. Local business owners, headteachers and the Lord Mayor have all signed up to do it. Another reason for doing it is the exercise, plus I’ve spent a lot of time laughing while I’ve been learning my three dances.

Q: What have you signed up for?

A: I’m currently a couple of weeks into my seven weeks of training. I’m learning three different dances – a group dance with the other couples, an ‘old time waltz’, which I’ll be dancing to Bo Jangles and the third dance is a hip hop dance with street music that my children probably know, but I have no idea what it is.

I’m dancing with a man called Stephen Henderson, who I didn’t know before, he works in a local business but he also teaches hip hop dancing. We are due to perform on May 7 at the Seagoe Hotel. All 380 tickets sold out in an hour, so we’ve added a second date on April 29. That’s also nearly sold out!

Q: Did you have any dance experience before getting involved?

A: I’d done a little bit of salsa, but my type of dancing usually involves me having a couple of glasses of wine and dancing to my own tune on the dance floor. This is very different. I have no experience of the waltz and that is supposed to be a very elegant dance, so I can’t mess that up.

Q: You’re used to public speaking but how do you feel about dancing in front of people?

A: I’m really out of my comfort zone but I’m seeing it as something that’s just a bit of fun. I’m used to public speaking because I’ve spoken at things such as the Advantage Conference in Dubai but this isn’t something I’m used to. If I go wrong (with the dance steps), people will notice so I want to do my best.

A: The ticket money is going towards Portadown Cares but I have a fundraising page for Action Cancer. I feel strongly about that cause and everyone has been affected by cancer in some way or another. I’ve already had pledges for a couple of hundred pounds but I’d like to raise £1,000. Whatever people can give is much appreciated and very generous.

If you would like to sponsor Sharon, go to justgiving.com/Sharon-Fleming4