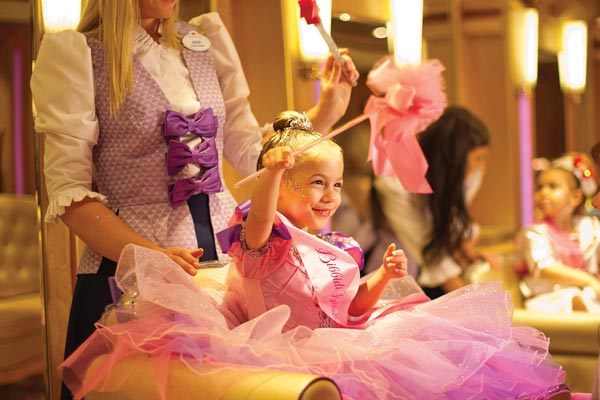 Flora Ioannou finds her inner child on board Disney Dream

Boarding Disney Dream is like walking in to a scene of a classic Disney film, where the princess arrives at the ball and is announced by the king’s herald – but in this case the herald is the ship’s crew and the trumpets are their claps and cheers.

Every family receives this personal greeting, which can take a couple of hours. It’s a nice touch, albeit rather embarrassing for us Brits.

Once the welcome ceremonies are over, the horn blasts When You Wish Upon a Star in typical Disney style at the sailaway, signalling the start of a four-night Bahamian cruise from Port Canaveral.

The 4,000-passenger ship is big and beautiful, with a 1930s art deco design. The outside takes on Mickey Mouse’s signature colours of black, red, white and yellow, while the luxurious interior of gold and well-polished wood is reminiscent of an elegant Park Lane hotel.

Classic Disney features are tastefully introduced around the ship, be it in the elaborate carpet design or the occasional artwork, but they aren’t overly ostentatious.

My stateroom was reasonably spacious, with a balcony to make the most of the amazing views. There was a bathtub shower and basin in one room and a separate toilet with a basin in another, a rare treat for a cruise ship. This is a nice touch and does away with the need to wait cross-legged while someone else has a shower. Nor did it lack storage space, with ample cupboards and drawers for my clothes and shoes – and many there are.

Given that Disney Dream is 40% larger and two decks taller than either Disney Magic or Disney Wonder, the designers have clearly maximised this extra space to make for a more comfortable stay.

For the little ones

Children can be dropped off at the kids’ clubs in the morning and picked up in the evening. There is an excellent high-tech security system in place and staff know the whereabouts of all children thanks to a wristband given to them as soon as they enter the kids’ club.

The state-of-the-art Disney’s Oceaneer Club caters for kids aged three to 10 and is split into four themed areas. There’s Andy’s Room, based on Disney Pixar’s Toy Story, with larger-than-life characters from the film, then Pixie Hollow, inspired by the popular film series and a homage to all things fairy-like. The Star Wars-themed area, which you’ll find only on Disney Dream, allows children to step inside the cockpit of Han Solo’s Millennium Falcon.

This intergalactic play area also features arts and crafts, a large screen and computer stations loaded with games from the Disney XD TV shows. In the Disney Infinity Game Room, children can interact with a complete set of characters on a life-sized Disney Infinity base and even try their hand at becoming a virtual Disney character.

Disney’s Oceaneer Lab is another interactive space, where kids can play games, perform crazy experiments, draw, paint and take part in all kinds of activities; this area would suit any creative kid with a strong imagination.

For teens and inbetweens

Exclusively for kids aged 14 to 16, who are given a special coded key to go in via a secret entrance, there’s the Vibe, which has the look and feel of a trendy club with an outdoor deck space. It also has a bar, serving non-alcoholic drinks.

Vibe has a high-tech media room where teens can watch movies or play video games on a 103-inch LCD screen with digital surround sound. In a separate stage area there are talent shows, karaoke contests and dance competitions, giving teens a chance to express themselves in any way they like.

For children who feel they are too old for the kids’ club, but too young to enter Vibe, Edge provides guests aged 11 to 14 with their own space. It’s equipped with high-tech entertainment, including flat-screen TVs, computers and video games and featuring daily activities.

For the kids at heart

While the kids are off having a great time, adults can too, with exclusive onboard areas created just for them – so much so you would never know in these spaces that there were children on board.

Unwind at Senses Spa & Salon, taking in a massage or spending hours relaxing and re-energising. There is also the tranquil, adult-only Quiet Cove Pool where you can catch some rays, away from the noise of thrill-seekers at the 765ft AquaDuck water coaster, which is transparent and hangs out over the side of the ship. In the evening, put on your glad rags and hit The District, an adult-only part of the ship and home to nightclubs and lounges Skyline, Pink, District Lounge, 687 Pub and Evolution.

The shows are of West End standard featuring, of course, all your favourite Disney characters. They include Disney’s Believe, Villains Tonight! and The Golden Mickeys, performing old favourites you can sing along to. The penultimate evening is Pirate Night, where everyone dons swashbuckling fancy dress at the outdoor Pirates of the Caribbean-themed show, with an amazing firework finale.

You can also come face-to-face with your favourite characters at meet-and-greets around the ship. They draw huge crowds, so if you want a photo with Captain Mickey and his crewmates, get there early.

Even with such a high bar, my favourite and most memorable of all the entertainment was the baby crawling race – which is exactly what it sounds like, a hilarious ‘race’ to see which tiny tot can cross the finish line first – in the main lobby area.

The three main restaurants – Enchanted Garden, Animator’s Palate and Royal Palace – are based on a rotational dining system. You eat at a different one each evening and the same staff come along with you. By the end of your stay they know what you drink, what you like and you know them on a first-name basis.

The food is of a high standard across the board, but none as high as the à la carte, adult-only Italian restaurant Palo. It has a cover charge, but the food is worth every penny.

At breakfast time, Cabanas caters for every fussy eater and there was nothing missing from the vast selection.

My first port of call was Nassau. Disney Dream offers a range of tours that all need to be pre-booked. I opted for a day at Atlantis Paradise Island Resort, taking in the white sandy beach and a spot of lunch, a tour that will set you back $75 for a half-day (or $49 for three to nine-year-olds, free for under-threes), although there are numerous upgrades to include on-site water park Aquaventure, swimming with dolphins or a round of golf.

On top of that, there’s a chance to try chocolate-making at the famous Graycliff Hotel, tours around the Bahamian capital and sea lion encounters on Blue Lagoon Island.

The second port of call was Disney’s own private island, Castaway Cay, in the Atlantic coral archipelago. Here, passengers can have a go at fishing, kayaking, parasailing and feeding stingrays, but I opted to take things a bit easier: after a leisurely bike ride around the island and a relaxing swim in the warm, crystal-clear waters, I treated myself to a full-body massage in a cabana on the adult-only beach.

Not to be missed

Bibbidi Bobbidi Boutique is where children of all ages can transform themselves into glittering princesses or swashbuckling, scar-faced pirates, courtesy of an amazing makeover by professional make-up artists. Obviously this all comes at a cost – from $20 for a Royal Knight package with hairstyling and a sword and shield, or $60 for a Crown Package with hairstyling, shimmering make-up, nail polish and a princess sash – but where glitter’s involved, who can say no?

There was even more magic with Disney’s Enchanted Art. Featuring familiar characters, it looks like any other artwork on the ship at first glance, except it can sense when someone is nearby and change from a still image to an animated one, complete with sound effects such as music and voices.

In addition, a special activity called the Midship Detective Agency allows guests to grab a ‘detective badge’ that prompts special interactions and animations with some of the Enchanted Art, during which characters will pop out from the artwork with clues.

A 10-night break with a week at Disney’s Beach Club Resort and a three-night Bahamas Cruise on Disney Dream starts at £2,415 in summer. It includes Virgin Atlantic flights from Gatwick, airport transfers and travel to Port Canaveral, and a 14-day Ultimate Ticket for the price of a seven-day ticket to the parks. Price based on two adults and two children, departing August 19. disneytravelagents.co.uk

Don’t miss the best parts of the Dream