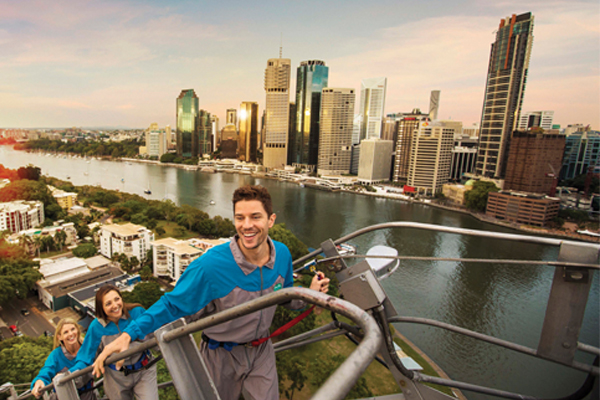 Brisbane is on the brink of a hipster revolution, finds David Whitley

It might not have the immediate visual wow-factor of Sydney or pulsating cultural energy of Melbourne, but Brisbane’s understated pleasantness makes it an underrated Australian gateway.

For visitors wanting to head north to the Great Barrier Reef and the tropical northern rainforests, the connections are much shorter than Sydney. But Brissie also has an awful lot within a couple of hours’ driving distance, making it a solid base for a holiday in its own right.

And the city is gradually getting cooler. This is most notable in the once-grubby nightlife district of Fortitude Valley, which now has lots of little laneways with hip bars, cafes and indie shops.

Brisbane is built around the Brisbane River, and most of the key attractions can be found along its banks. The South Bank parklands, originally sculpted for Expo 88, are the obvious place to spend a lazy day. Key museums such as the Museum of Queensland and Gallery of Modern Art can be found there, while the Streets Beach is a free family favourite. It may be entirely artificial, but the humongous pool is screamingly popular on a sunny day.

Further round the bend in the river is Kangaroo Point, where cliffs once quarried to make buildings in the colonial era are now home to the all-action Riverlife. This outdoors centre offers abseiling and rock-climbing lessons, kayaking trips and bike hire.
riverlife.com.au

In keeping with the adventurous theme, the Story Bridge Adventure Climb leads visitors to the top of the city’s emblematic bridge. The two-and-a-half hour experience includes safety briefings, a laughably dowdy jumpsuit and being harnessed and clipped onto a wire that runs all the way up to the 74-metre-high summit. It’s soft adventure rather than a strenuous adrenaline rush, and costs £64. sbac.net.au

If you’re after heart-warming rather than heart-pumping, then the Lone Pine Koala Sanctuary is Brisbane’s classic cutesy attraction. There, you can ‘cuddle’ a koala for a photo opportunity (or rather hold your arms out while it grabs on to you), hand-feed kangaroos and laugh at the eternally comical wombats. It’s a nice activity to combine with a river cruise – Austravel sells a cruise-and-koala combo for £40.

It’s also possible to take a day trip out to Moreton Island, which has massive sand dunes to bomb down on a heavily waxed sandboard, and a series of shipwrecks to snorkel around. Sunrover runs tours out there, including the two-way ferry trip and 4×4 tour around the island, from the Port of Brisbane for £72. Wildlife lovers have a good chance of seeing turtles, pelicans, rays and dolphins.
sunrover.com.au

Brisbane has a tendency to do better at functional rather than flamboyant accommodation, with the best bets usually being apartment hotels. There’s a good range to choose from, with the Adina Apartment Hotel Brisbane Anzac Square a solid example. Part of the appeal is being just across the road from Central Station, which makes exploring the city’s farthest reaches much easier, but the space and facilities are highly welcome too. The one-bedroom apartments come with washer/dryers, and prices start at about £79.
tfehotels.com.au

In the same vein, albeit a little snazzier, is Capri by Fraser, which goes for an art blizzard in the lobby. Rooms are more toned-down, but come with either microwave or kitchenette. An indoor pool is a handy bonus too, with rooms from £120.
brisbane.capribyfraser.com

Also aiming for bang-up-to-date modernity is the Next. It makes a big play on its technology – you can download an app to check in and control room lighting from your phone – but the location in the middle of Queen Street Mall is the key selling point. The small lap pool is a nice touch, as is the policy of allowing guests to raid their mini-bar for up to four free items a night. Prices start at £117.
silverneedlehotels.com/next/brisbane

If you prefer the once-seedy but now increasingly hip Fortitude Valley, the Limes is an excellent bet. Rooms are small, but there’s a dark, sleek design ethic to them that adds a point of difference from Brisbane’s often-functional hotels. There’s also a fab selection of restaurants – all kind of cool in their own right – to choose from. Rooms cost from £97.
limeshotel.com.au

Heading north out of Brisbane offers a rather different experience from heading south. To the south is the Gold Coast, Australia’s premier Florida-esque fun-in-the-sun strip. The big theme parks cluster along here, with Dreamworld having the best rides and Warner Bros Movie World offering the best all-round shows and thrills experience. Do Something Different offers one-day tickets at £53 adult/£48 child for Dreamworld, and £42/£27 for Movie World.

In the other direction is the Sunshine Coast, where Mooloolaba pulls off a lower-key, family-friendly take on the Gold Coast. The Underwater World aquarium there is a big hit; day tickets cost £21, with seal swimming and shark dive experiences as possible add-ons.
underwaterworld.com.au

But the Sunshine Coast’s real star is Noosa, at the northern end. An upmarket town surrounded by swirling waterways, it contains arguably Australia’s swankiest shopping and restaurant strip, Hastings Street.

The schmoozing is only a small part of the appeal though – there’s great enjoyment to be had hiring stand-up paddle boards or kayaks to explore the waterways, surfing on the surf beaches and spotting koalas on a stroll through Noosa National Park.

It gets an awful lot wilder north of Noosa, though, and it’s possible to explore two very different sides of the Great Sandy National Park on day trips. Surf and Sand Safaris runs a day trip up the Teewah Beach – a 30-mile strip where normal road rules apply, even though you’re bobbing along the sand. Massive dune systems with multi-coloured sand canyons and cliffs can be seen to the left, and more than a few migrating humpback whales to the right.

At the end of the beach, the lighthouse offers supreme views out to Fraser Island – the world’s largest sand island – and dolphins and rays are commonly spotted. The trip costs £72.
surfandsandsafaris.com

A very different perspective can be had heading up the Noosa River, through a series of shallow lakes and into wild bushland. The Discovery Group runs cruises up into the Noosa Everglades, with a barbecue lunch at a campsite regularly frequented by inquisitive goannas (monitor lizards). The more adventurous can test their arm muscles and paddle a good stretch of the way in canoes. The six-hour Bar-B-Canoe tour costs £69.
thediscoverygroup.com.au

The Sunshine Coast hinterland has its merits too – the gigantic Wednesday and Saturday markets at Eumundi are great for mooching and craft shopping. And, in the Glasshouse Mountains, Australia Zoo has great animal shows. The zoo, formerly owned by Steve Irwin, is the best place in the country to learn about Australia’s unique wildlife. Entrance tickets cost £31.
eumundimarkets.com.au
australiazoo.com.au