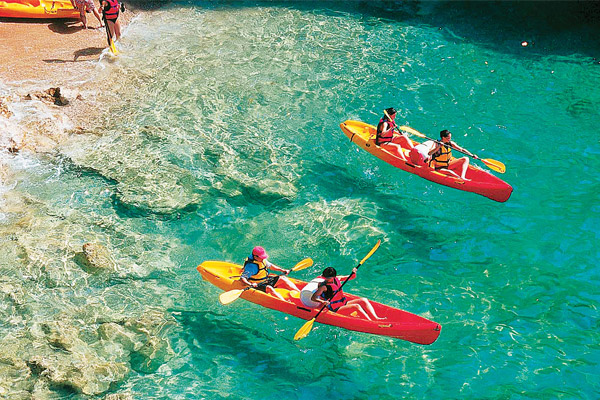 Croatia’s great outdoors is so alluring that it can tempt holidaymakers away from the endless beaches of the Adriatic coast – which is a tough feat.

With eight national parks, including the wonder that is the Plitvice Lakes, as well as rugged mountains, dramatic canyons, rivers and reefs, there’s an activity to suit every adrenaline level.

The Plitvice Lakes National Park is home to 16 turquoise lakes and countless waterfalls that tumble into each other in one of Croatia’s most astounding sights. It’s a Unesco World Heritage Site – and rightly so. The lower lakes are most popular with visitors, who can explore easily along wooden walkways that wind through the woods.

Electric buses and boats keep the environmental impact on the delicate eco-system to a minimum.

Adventurous clients can discover the more remote side of the park by taking a boat across Lake Kozjak to the upper lakes. The hiking here is more rugged, offering the chance to spot wildlife including bears and wolves. Hotel Jezero, one of the few properties in the park, is a good base from which to explore. Prestige Holidays offers seven nights’ bed and breakfast at the hotel from £733, including car hire and flights.

But Plitvice isn’t the only star of the Croatian hinterland. The nearby Gacka River is one of the latest to offer paddle-boarding in its emerald-green waters. Farther south, the raging rapids in the Krupa and Zrmanja canyons give clients an unforgettable kayaking adventure. Activities Abroad’s eight-day Plitvice Lakes Adventure, which includes hiking in Plitvice, paddle-boarding and cycling in Gacka and canoeing in Zrmanja, starts at £820, including flights, accommodation and most meals.

The rolling hills and oak forests of this heart-shaped peninsula have more than a hint of Tuscany about them – helped by the very Italian flavours of truffles and olive oil.

The tranquil countryside is relatively gentle, even taking into account the hilltop medieval villages found in much of the interior.

The lush landscapes lend themselves to relaxed hiking and cycling both along the coast and within the hilly interior. An eight-day moderate-level cycling holiday offered by Headwater, which features a breathtaking coastal journey from the Roman city of Pula to the beach resort of Porec, starts at £1,139 including flights, bed-and-breakfast accommodation and luggage transfers. Tour-only options are also available.

Those who want to take things at a slower pace can explore the peninsula on foot with a self-guided walking holiday. Inntravel’s seven-night Across the Istrian Peninsula takes in an old railway-cum-walking-track that winds past vineyards and villages perched on the hillsides. It starts in the Venetian-style town of Buje before ending in the Kvarner Gulf resort of Lovran. Prices start at £785 including accommodation, most meals and luggage transfers between hotels.

The Kvarner Gulf marks the point where Istria ends and Dalmatia begins, and it’s home to Croatia’s two largest islands. Cres and Krk might not trip easily off the tongue, but they’re instantly captivating to holidaymakers looking for unspoilt beauty and Venetian architecture.

Clients have a bewildering choice of islands, including Rab, with its sandy beaches and Roman ruins; Pag, which is home of the renowned paski sir sheep’s milk cheese and some lively summer festivals; and colourful Losinj.

One option is a leisurely exploration by bike – made even easier on electric bikes – with a few nights on a motor yacht to rest those tired legs. Freedom Treks offers a seven-night guided holiday around the Kvarner islands combining cycling (including e-bikes) with accommodation on a wooden yacht. Prices start at £662, including accommodation and most meals, but excluding flights, transfers and bike hire.

Bordering the coast near Pag is Paklenica National Park, where the karst mountains of the Velebit range have become a focal point for hikers, climbers and mountain bikers in search of new and challenging terrain.

There’s a sheer rock wall as soon as you enter the park, where climbers can immediately test their mettle. Many clients use the coastal town of Starigrad as a base, which is often known as Starigrad-Paklenica to avoid confusion with another Starigrad just up the coast.

Intrepid Travel has an eight-day Active in Croatia holiday that includes hiking and biking in Paklenica, and sea kayaking along the coast to Vinjerac, as well as rafting on the Zrmanja River and a day’s walking in Plitvice Lakes National Park. Prices start at £935, including accommodation, activities and some meals.

It might just be Dalmatian pride, but locals reckon that the waterfalls, lakes and gorges of Krka National Park are even more magnificent than Plitvice. They certainly are an impressive sight, and the most spectacular waterfall, Skradinski Buk, can be reached by boats that leave from the village of Skradin. The coastal city of Sibenik makes a handy base for exploring the park, with its charming old town and buzzing waterfront.

Anatolian Sky Holidays features the Hotel Ivan within the Solaris Beach Resort, which has its own beach, aqua park, bike hire and a boat to explore the nearby islands. A week’s bed and breakfast starts at £664, including flights and transfers.

Further south is Trogir, an ancient town set on a narrow island linked to the mainland by a bridge. Escorted-tours operator Explore uses the town as the base for a family adventure holiday that includes sea kayaking around Trogir, canyoning and rafting in the Cetina Gorge, gentle hiking around the island of Ciovo and the chance to visit the stylish city of Split. The eight-day holiday starts at £1,089, including flights, transfers, half-board accommodation and guides. The holiday is suitable for children from the age of eight, and tour-only options are available.

The island of Brac is home to the distinctive beach of Zlatni Rat, a V-shaped sliver of bleached shingle. The windsurfing in the nearby village of Bol is some of the best in Croatia. It’s also popular for diving, with underwater caves and even the watery remains of a Roman villa within a 15-minute boat ride of Zlatni Rat.

Each July, Brac hosts the Vanka Regule extreme-sports festival, featuring everything from freeride mountain biking to free diving, as well as a film festival showcasing the top competitors in action. If that sounds a little extreme, Classic Collection Holidays offers a week in the Villa Vela Luka on the waterfront near Supetar on the north coast, where clients can try windsurfing and other water sports on the pine-fringed beaches. Prices start at £599, including flights, transfers and half-board accommodation.

Sunny Hvar has a reputation for its cosmopolitan nightlife, but clients who fancy a change of scene can cycle or hike through the tranquil and hilly interior, where ancient Greek and Roman trails wind past vineyards and orchards. Intrepid rock climbers can try some of the 70 bolted routes spread around the island’s rock faces. Balkan Holidays offers a week’s bed and breakfast at the waterfront Hotel Riva in Hvar Town from £636, including flights and transfers.

From Hvar, it’s easy to travel by boat to the peaceful island of Vis, which has some of the most impressive diving in Croatia. There are about a dozen submerged wrecks including a Venetian galleon and a Second World War bomber. Vis used to be a military base and has been open to tourists only since 1989; its lack of major development makes it one of the most relaxing islands in the Adriatic.