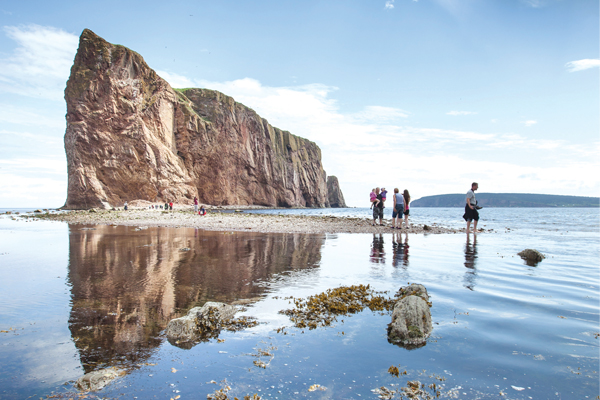 The ‘cruises for people who aren’t into cruises’ market is on the rise, combining ocean-going adventure with a slice of luxury or, as One Ocean Expeditions calls it, “an expedition with a hot tub”.

Liking the sound of that, I set sail on the inaugural Fins and Fiddles itinerary around the Maritimes in eastern Canada, and discovered an unexpected passion for birdwatching, visited France’s oldest overseas territory Saint-Pierre et Miquelon, and saw the famous Sable Island horses, which live on fragile sand dunes in the Atlantic Ocean.

Ideal for history buffs, photographers and wildlife enthusiasts, and a bucket-list trip for birders, as non-cruises go, this is likely to win over even the most ardent objectors.

One Ocean is a Canadian operation that specialises in Arctic expeditions in state-of-the-art Russian-crewed explorer vessels, but its new Maritimes ‘cruise’ will now feel a little closer to home thanks to last year’s introduction of Glasgow to Halifax flights, operating from May 1 until October 22 this year with Westjet.

Like those on most cruises, cabins are typically compact but perfectly comfortable. Luggage is stored to maximise space, showers are pleasingly high-pressure and the beds are cosy.

Food always plays a significant role in ship life, and the Russian kitchen and serving crew provide piled-high multi-course meals in the dining room, which comfortably seats all passengers in one sitting. Russian flavours often feature with dishes such as borscht (beet soup) appearing on the menu, alongside local treats such as juicy ocean-fresh lobster.

With 63 staff serving only 96 passengers, the six-level Akademik Ioffe offers excellent customer service and personal attention, thanks to the mostly Canadian ‘adventure concierges’.

Many of the crew are experts within their field. On board this trip was a photographer, historian and a wonderfully patient kayak instructor, all there to help passengers gain a deeper understanding and enjoyment of the islands.

I adored the lectures – who knew the history of cod fishing or tectonic plate theory in Newfoundland could be so fascinating?

The daily breakfast briefings set out the programme. Soft adventure plays a huge role, allowing passengers to join paddle-boarding or kayaking trips, choose to pedal out on guided bike rides or go hiking, or hop on board a Zodiac to join a birdwatching tour for photographers.

Away from the on-deck hot tub, it’s easy to feel as if you’re truly heading for adventure. On the first day, kitted out in wet-weather gear and rubber boots, we headed for the mud room to vacuum our kit and disinfect our boots to make sure no seeds or grasses made their way on to Sable Island’s protected shores.

The island holds a mythical spot in the Canadian psyche. Known as the ‘graveyard of the Atlantic’, more than 350 ships have been wrecked off its ever-shifting sandy shores since 1583. But it’s the wild horses, which somehow manage to survive on an oasis of sand and wild grass, that have really captured the country’s imagination.

In the 1950s, the government planned for the horses to be culled, which initiated a letter-writing campaign by schoolchildren across the country to save them. Prime minister John Diefenbaker heard their plea and wrote it into law that: “No person shall, without having first obtained written permission, molest, interfere with, feed or otherwise have anything to do with the ponies on Sable Island.”

And that remains the case today, so before we boarded the Zodiacs, we received a briefing and were told to stay at least 20 metres away from the horses.

Stepping on to Sable Island was a rare and thrilling treat – a privilege granted to so few that more people have visited the Arctic than this tiny national park.

There’s something extraordinary about being somewhere that’s just a vast nothingness, an ever-changing landscape shaped and pulled apart and reshaped again and again by the sea.

While the roaring wind scattered wave after wave of sand, we climbed the Sahara-like dunes and in the distance saw ponies daintily nibbling the wild grass. Here and there we’d step over gleaming white bones and skulls, a reminder of the hard life these horses lead.

Canada is a mosaic of cultures, and layers of French and Celtic history play a huge part on the east coast, so the Fins and Fiddles expedition helps explain and explore the past. The French influence – and language – remains on so many islands. During a guided bus tour of the Magdalen Islands, I snacked on tasty ‘squeaky’ curds from the Pied de Vent cheesemongers along the way.

On Anticosti Island, I sat in a seafront cafe and enjoyed a perfectly made cafe au lait and buttery pain au chocolat before exploring the pretty little town, with its fascinating fishing museum and avant garde art gallery.

And walking the streets on Saint-Pierre et Miquelon, I had an unmistakable sense of being in a small town in Normandy. The signage was French, as was the pop music playing on the radios in the shops, and I paid for my wine with euros – even the peeling plaster on the walls of the pastel houses was uniquely French.

Then there is the Celtic side: we sailed into Bonne Bay, and were welcomed ashore by the rhythm of toe-tapping fiddles and that legendarily warm Newfoundland hospitality.

Home to the oldest animal eco-system in the world, Newfoundland bristles with millennia-old marvels. We explored Gros Morne National Park, walking on the Earth’s mantle, a neat piece of nature that explains tectonic plate theory. This part of the world even proves Darwin’s theory of evolution, thanks to its pre-Cambrian fossils embedded on the seashore – and, thanks to the lecture that I attended the previous evening, this even made sense to me.

On a wild and windy day, I joined an expedition on board one of the Zodiacs, finally a pro now at the ‘sailor’s grip’ required to get in and out of the bobbing boats to and from the stairs lashed to the side of our ship.

We bounced across the waves to spot puffins, their cartoonishly plump little bodies zipping through the air with their wings wildly flapping. Spotting puffs of smoke along the water, we raced to catch up with humpback whales slapping the surface with their tails.

A smaller ship means more freedom to visit off-the-beaten-track destinations and that was certainly true of our time on Francois, a tiny ex-fishing town perched on a cliff at the end of a long fjord on Newfoundland’s south coast.

We were welcomed for a day tour of its little community and that night they threw a ‘kitchen party’ for us, where we danced with the locals in their community centre.

It was a warm night and as we returned to the ship by Zodiac, we cut the engine and drifted in the darkness, watching shooting stars in the velvet-black sky and the wonder of the trailing lights of bioluminescence below the waves.

One more magical moment to add to the rest. Call me a non-cruise convert.

I’m from Nova Scotia, and we want to get the message out about just how many marvels there are in our backyard, and to offer a broad spectrum of culture and adventure. We’re very keen to work with the British market. We don’t compete with agents – the ones we work with already are very loyal to us.

Traditionally, we’ve done well with the hardcore wildlife-watching market. This voyage is something new for us, but with just a five-hour flight, it’s so easy for the British market to come to us.

One Ocean Expeditions offers an 11-day Canadian Maritimes Fins and Fiddles trip on board Akademik Sergey Vavilov, from £2,104 per person cruise-only based on a triple cabin, or £2,806 for a twin share.

The ship departs from Cape Breton Island on June 28, 2017, for ports including Sable Island, Prince Edward Island, the Magdalen Islands, Gaspe Peninsula and Saint-Pierre et Miquelon. The cruise is full-board, with 24-hour tea, coffee and hot chocolate, and juice at breakfast (other drinks cost extra).
oneoceanexpeditions.com