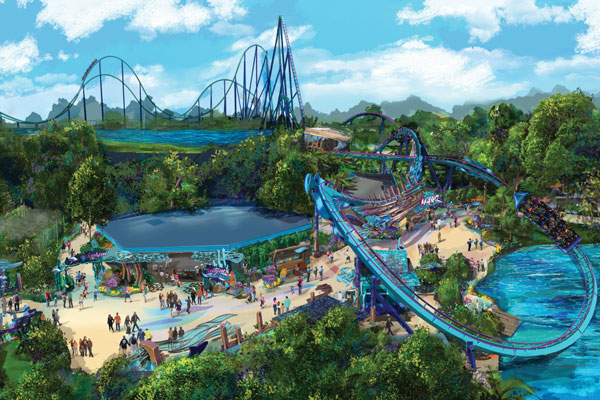 Record-breaking rides, exciting new water parks, major hotel renovations and a London Eye-style wheel soaring above International Drive: there’s a lot to get excited about in Orlando this year, and we’ve got the lowdown on the highlights.

The Orlando Eye is a 400ft-tall observation wheel that opened last summer, offering enough of a thrill for older kids and adults – its views over Central Florida are worth the

$20 entry fee alone – without being too scary for younger visitors.

It’s based in the heart of International Drive at retail and entertainment complex i-drive 360, which also continues to expand. The latest additions include Sugar Factory, the American sweet shop which brought us the blingy sparkle-studded Couture Pop lollipops, endorsed by the Kardashians and a host of other celebs, and Naru Sushi, a branch of the popular sushi restaurant chain.

Other attractions at the complex include Madame Tussauds, Sea Life Aquarium and Skeletons, an exhibition of complete animal skeletons designed to appeal to younger visitors.

A number of new openings have cemented downtown Orlando’s reputation as one of Florida’s top culinary and nightlife destinations. High-profile chefs James and Julie Petrakis – both nominated for the prestigious James Beard Awards, also known as the restaurant industry Oscars – will open DoveCote in late spring. The restaurant will have a barista station offering grab-and-go breakfasts, a French-inspired lunch and dinner menu, and an extensive wine list.

James and Julie are behind popular Winter Park venues Ravenous Pig and Cask & Larder; a branch of the latter will also open at Orlando airport this summer.

Another high-profile downtown opening is Wahlburgers, a branch of the upmarket burger restaurant founded by Mark Wahlberg and his brothers Donnie and Paul, which opened its doors in February. The restaurant chain has been the focus of a recent reality show, so expect plenty of novelty value as well as some classic fast-food favourites.

This summer will see the opening of the Mako hypercoaster on June 10. Inspired by the agility of the mako shark, it’s going to be Orlando’s fastest, tallest and longest rollercoaster, with a length of 1,451 metres – that’s almost a mile – and top speeds of 73mph.

The ride will be the focal point of an entirely new shark-themed section of the park. Over the coming 12 months this two-acre area will be expanded with artificial shipwrecks, shark encounter experiences and a shark-themed grill (and no, we’re assured shark definitely won’t be on the menu).

Over at Tampa Bay’s Busch Gardens, also owned by SeaWorld, there’ll be another high-profile summer opening. Cobra’s Curse will be a spinning rollercoaster – with cars rotating as they travel along the track – which will take passengers on a white-knuckle ride through the African wilderness.

Its queueing area will be just as scary for some, with a snake exhibit to include Jameson’s mambas, Angolan pythons, rhinoceros and gaboon vipers.

Universal has an exciting couple of years ahead. New ride Skull Island: Reign of Kong will open at Islands of Adventure this summer. The trackless ride will feature 40ft-long expedition vehicles driven by one of five different ‘characters’ to build the atmosphere as passengers search for the movie monster in a huge, jungle-covered island filled with fearsome beasts.

In June, Universal Orlando Resort will open a hotel on Adventure Way: Loews Sapphire Falls Resort will be a 1,000-room, Caribbean-themed affair, built around an enormous 16,000-square-foot pool incorporating a white-sand beach. Dining options will include the Caribbean-themed Amatista Cookhouse and a poolside bar and grill, and there will also be a rum bar. Around 60% of the rooms will be connectable and there will be 83 suites. Reservations are being accepted for stays from July 14, and room rates start at £124.

Guests enjoy various exclusive benefits at Universal Orlando, including early park admission to The Wizarding World of Harry Potter and complimentary water taxi and shuttle service to and from the Universal Orlando theme parks and Universal CityWalk.

Over at Cabana Bay Beach Resort, it’s already time to expand, despite opening only two years ago. The property plans to add 400 rooms to the existing 1,800 by next year.

Elsewhere, Universal’s Hard Rock Hotel, which was extensively renovated last year, has recently upgraded its collection of memorabilia to mark its 15th anniversary.

New items on display include Keith Richards’ five-string guitar, a jumpsuit worn by Michael Jackson during the Jacksons’ 1984 Victory tour and a dress worn by Carrie Underwood in the video for her 2014 hit Something in the Water.

Finally, Universal has confirmed a new water park, Volcano Bay, will open in Orlando in 2017. Details are scarce, but it will be to the south of Universal’s Cabana Bay Beach Resort, and effectively act as a replacement for Universal’s Wet ’n Wild water park, which will close at the end of 2016.

Next year will also see the rollout of high-speed ride Fast & Furious: Supercharged from its Hollywood home to the Orlando resort. Work has already begun on the ride, which will replace Disaster: A Major Motion Picture Starring You! and the Beetlejuice Graveyard Revue.

The area which was once Downtown Disney officially became Disney Springs in late 2015. Over the past two years it has undergone a huge transformation, with new nightclubs, bars, shops and restaurants. By the end of summer, when construction should be complete, there will be four distinct neighbourhoods to explore: The Landing, Marketplace, West Side and Town Center.

Notable openings over the coming months include the introduction of upmarket steakhouse chain STK and of a branch of Frontera Fresco, a restaurant concept owned by US celebrity chef Rick Bayless, who specialises in Mexican cuisine.

Over at Epcot, fans of the film Frozen can now meet and greet two of its stars, Anna and Elsa, at the Norway Pavilion’s Royal Sommerhus. The meet and greet previously took place at the Magic Kingdom park.

The Norway Pavilion is also where Frozen fans will find another summer addition, Frozen Ever After, a high-tech ride which allows visitors to explore a snowy world filled with the film’s characters.

Disney will be launching several Star Wars-themed attractions this year to mark the return of the landmark franchise. These include a new nightly fireworks and laser projection show called Star Wars: A Galactic Spectacular, which launches at Disney’s Hollywood Studios in summer. A live stage show, Star Wars: A Galaxy Far, Far Away, launched on April 4 at the same park.

At Disney’s Animal Kingdom, popular safari-based attraction Sunset Kilimanjaro Safaris was also expanded in April to allow visitors to sign up for night‑time adventures, and there are also two new species of animal: African wild dogs and hyenas.

Farther afield, Legoland Florida Resort, 50 miles from Orlando, has unveiled plans for a beach-themed resort. The Legoland Beach Retreat will open in 2017 adjacent to the theme park. The lakefront property will feature 83 single-storey duplex units, offering 166 separate accommodations that will sleep up to five.

The Kids Eat Free Card +Plus Orlando – £10 from Attraction World – has added offers, and now comes as an ecard or app

“Children and teenagers are steadily gaining influence when it comes to family holiday decisions, and as if kids didn’t have enough reason to beg their parents to come to Florida, Orlando has added even more draws this year and next. We’ve seen a trend in families booking ahead for summer 2017, especially with new attractions opening, including Universal’s Volcano Bay in 2017. Last year we saw an increase in families staying in private villa accommodation; these provide more flexibility and are great value for money for a large family or group.”

Do Something Different’s bestseller is the Freedom Ticket, a combination pass which includes 14 days’ access to the 11 main Orlando parks at Disney, Universal and SeaWorld. The ticket costs from £591 per adult and £562 per child.

A seven-night Disney package with Theme Park Beds costs from £1,706 based on a family of four sharing a room at Disney’s All Star Music Resort. Price includes park tickets and return airport transfers on Disney’s Magical Express coach, for departures in November.

Funway Holidays offers seven nights at the three-star Holiday Inn & Suites, adjacent to Universal Orlando, from £639 including BA flights from Gatwick, in May.

Win a VIP holiday to Florida!

SeaWorld Parks & Entertainment is offering one lucky reader and their family the chance to win a seven-night VIP holiday to Florida to brave two new rides, including the tallest, fastest, longest rollercoaster in Orlando.

The winning agent will take an adrenaline-filled family holiday to Florida to experience SeaWorld Parks’ world-class rides and fascinating animals – and then tell Travel Weekly readers all about it.

The winner will receive return flights to Orlando and accommodation for two adults and up to two children, aged 12 or under, as well as entry to all four SeaWorld parks in Florida: