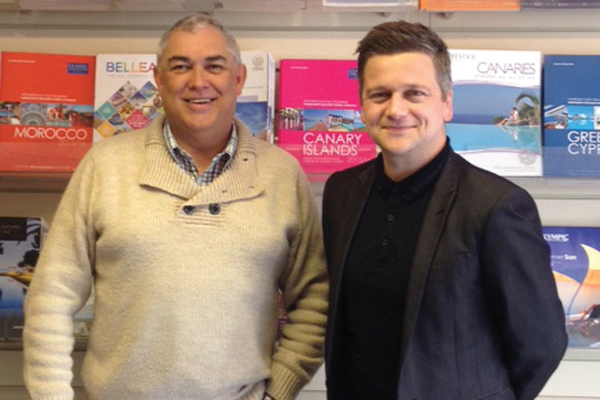 Gavin Davies has worked at the same agency for 16 years. Starting as consultant, he is now joint owner with business partner Clive Davis. But it’s been far from easy and he credits the support of family and friends for keeping his business afloat.

Q. Global Travel Worldwide opened six months before the September 11 terror attacks in 2001. How difficult was that?

A. 9/11 was the first issue we faced. I remember sitting in the office and it coming on the radio. After that there was a bit of a downturn in bookings, but the UK public didn’t let it deter them too much. Turnover each year was around £1.5 million between 2001 and 2005, which for a new agency was pretty good.

Q. Within six years you rose up the ranks from consultant to joint owner. How?

A. In October 2007, the owner approached me and my now business partner, one of the consultants. He told us on the Monday he wanted to sell and gave us until the Friday to make up our minds. He had been touting the business around, but wanted to give us an opportunity too. It was really a case of approaching our parents for help. We were lucky: the business was worth a lot more than we paid. He was happy to sell it at a discounted price and pay it off over 12 months. Owning a business was not something that crossed my mind in my mid-20s but we thought ‘why not give it a go?’

Q. You bought the business as the recession hit the UK economy. How did the agency survive?

A. Our turnover went from £1.5 million to, at worst, £700,000. Between 2007 and 2009 our challenges really started. We had to sit down and look at what we were spending; we knew we had to make cutbacks. We had to lose our full‑time member of staff; it wasn’t an easy decision, but it was part of the learning curve for me for the business to survive.

Q. What was the biggest decision you made to save the business from closure?

A. Our 10-year lease was coming up for renewal in 2010 and we approached the landlord to convert the big unit we had back into two retail units to halve our rates. It was a testing time. He agreed but we had to find someone to take on the other half of the premises. We had a bakery interested, but that fell through in 2010; then a hairdressers, but they pulled out in 2011. Towards the end of 2012 we were approached by Coral, the bookmakers. It won planning permission on appeal and opened in 2014. That halved our rent and we qualified for small business rate relief. Our turnover went back up to just over £1 million.

Q. What was your toughest year?

A. 2011 was when we were really scraping the barrel. The bank was not willing to increase our overdraft. We managed to secure funds through family and friends to keep us going for another few months. Without them, we might have had to close. Even though we had repeat customers, the recession made such a dent in our funds it was a real struggle.

Q. How is business now?

A. We managed to get turnover back up to £1.2 million in 2015 and took on another full-timer. January 2015 was the highest-grossing month we’ve ever had. Now we are on target to hit £1.5 million again and have truly turned the corner. It’s amazing how things can change in 12 months. The revenue we’ve had has allowed us to renovate our office with new desks, flooring and iPads, and we’re looking at branching out into business travel.

Don’t be scared to ask for help – whether from colleagues, banks, friends or family.
Stay in touch with clients while they are away to let them know you are there to help.
Email hotels prior to clients’ arrival to leave a note wishing them a happy holiday.