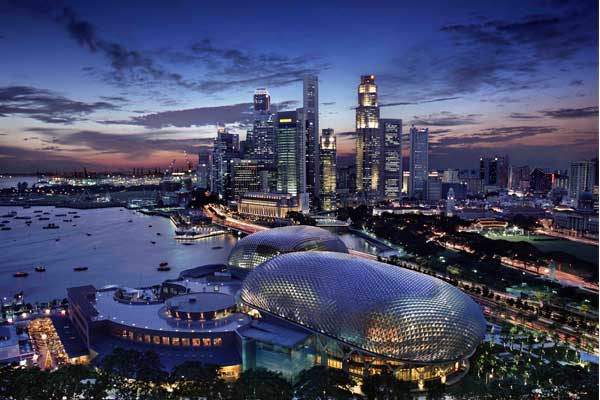 This Asian metropolis is a beguiling mix of cultures, discovers Hollie-Rae Merrick.
@Hollierae_tw

Don’t let its size fool you. Singapore might be a tiny island state but, as the saying goes, small often means perfectly formed, and that well describes this destination.

For those unfamiliar with the so-called Lion City, it’s probably best known for two things: the famous Raffles Hotel and the mass of high-rise skyscrapers in the business district. But scratch beneath the surface and you’ll soon discover there’s far more to this city than meets the eye.

The lack of space means different cultures and religions have intertwined to create a bit of a melting pot, and that’s all part of this city’s charm. Juxtapositions of old and new architecture are commonplace here, with historic buildings, temples and mosques often just a stone’s throw from modern developments.

Made up of the mainland and 62 surrounding islands, Singapore is typically used as a stopover destination for those travelling farther afield, with regular flight connections opening up the rest of southeast Asia and Australasia.

But with plentiful attractions and stunning hotels, it’s also quickly becoming a popular port of call on numerous cruise lines’ Asian itineraries. Seabourn’s new ship Seabourn Encore, for example, is even holding its launch celebrations in Singapore later this year.

And its appeal is clearly widening as the number of UK visitors to Singapore increased by 4.8% in 2015, with almost 474,000 people paying a visit.

You’ll often hear the phrase shiok being bandied about by locals when they’re eating, drinking and generally having a good time. Shiok means ‘extremely awesome’, according to my guide Josephine Wee, and by the end of the trip I was shouting ‘Shiok!’ from the rooftops (quite literally, after a few drinks at LeVeL33, the world’s highest microbrewery).

Forget Singapore slings: the combination of sun, amazing cuisine and intriguing heritage ensured that I had more of a Singapore fling with this city during my visit.

Why? This is the modern side of Singapore that the world has come to know and love over recent years. At the centre of this stylish district is the famous Marina Bay Sands Hotel and since it was built in 2010, it’s quickly established itself as the heart of Singapore’s cityscape. Built on reclaimed land, this relatively new addition to Singapore’s skyline has attracted a number of new sights and entertainment venues, with everything from a theatre arena and an observation wheel to a golf course and a massive plant sanctuary.

What to do? The only question is where to start: Marina Bay has become a bit of a marvel in its own right and it’s often at the top of the hit list for tourists. Gardens by the Bay is without doubt one of the city’s best attractions. Here you’ll find 18 solar-powered ‘supertrees’, which look like something out of hit movie Avatar. A 128-metre aerial walkway connects two of the trees, giving an amazing view of the city, while those who’d rather keep their feet on the ground can head to the Supertree Grove as the sun sets to watch the free Garden Rhapsody Light Show which occurs twice a night. The shows (7.45pm and 8.45pm daily) last 15 minutes and are often themed depending on the season or special events.

Why? This district is a sharp contrast to the rest of Singapore. The majority of the city is built up, shiny and pristine, but head to Chinatown and you’ll come across low-rise buildings crowding along little alleyways.

What to do? The inside of the Buddha Tooth Relic Temple is stunning, even if it’s not as historic as it might look (it was built in 2007). Despite that, it’s definitely worth a visit. The street market also attracts a lot of tourists, with everything from silk robes and chopsticks to lanterns and tea sets on offer. Be sure to come hungry: from high‑end restaurants to quick‑but-tasty street-food stalls, there’s no shortage of authentic Chinese eats.

Why? It’s one of the hippest and most bohemian parts of Singapore. Its landmark is the Sultan Mosque and its stunning golden domes are the focal point of the area.

What to do?The bars and restaurants of Haji Lane are often abuzz with activity. Filled with independent stores and several quirky coffee shops – including The Selfie Coffee where customers pay more if they want to have a Polaroid taken while there – it is a lively area to explore day or night.

Why? This bustling area is one of Singapore’s most vibrant, crammed full of restaurants and shops, from traditional traders such as fabric dealers and dressmakers to modern clothing and furniture boutiques.Serangoon Road and the surrounding streets are also home to Hindu and Chinese temples, mosques and churches, offering a perfect way to delve into the city’s varied cultures and heritages. The cultural enclave of Little India beautifully evokes a Singapore of days gone by, and its rustic appearance and heritage is a big draw. It’s certainly a far cry from the newer and more aesthetically pleasing parts of the city, and that’s what makes it so special.

What to do? Little India is a shoppers’ paradise – it even has a 24-hour mall – and each street is heaving with tiny shops stacked high with gold jewellery, bold‑print saris and much more. The colourful and intricate design of Sri Veeramakaliamman Temple secures its place as the showstopper of Little India. Its unique architecture makes it one of the city’s most-photographed buildings.

Why? If the mainland is a city slickers’ heaven, then Sentosa Island is a chilled-out, beach lover’s dream. But aside from its sandy beaches and extensive choice of hotels – ranging from the Hard Rock Hotel Singapore to Shangri-La’s Rasa Sentosa Resort – the island is also full of theme parks and rides. Guests staying on the mainland venture here for day trips, either taking the cable car (from £6.60) or making the short drive across the water.

What to do? My first port of call was a quick dip in the South China Sea, before heading straight into action to put Sentosa’s Skyline Luge to the test (about £9). Being terrified of all things high or fast, this wouldn’t have been top of my wishlist, but with unbelievable aerial views it’s a must for anyone more adventurous than me.

Marina Bay
The iconic Marina Bay Sands Hotel is a well-established landmark. Its infinity pool offers arguably the best view of the city and with 2,560 rooms (and 18 room categories) it’s easily the biggest hotel in Singapore. There’s also a club and bars at the top of the 55-floor hotel, and an observation deck open to the public (£11 for adults).
marinabysands.com

Little India
Boutique hotel Wanderlust has just 29 rooms, but each is unique with a fun and distinct design. Each floor of the former 1920s school building has a different theme, with some based on colours or song titles. Other rooms have weird and wonderful themes such as origami, pop art, typewriters, bling, trees and space. Rooms from £152.
wanderlusthotel.com

Sentosa Island
The low-key but luxurious Capella Sentosa Hotel is probably one of Singapore’s best-kept secrets. The colonial-style property has 112 rooms, including 11 suites, 38 villas and two manors, and offers free shuttle buses around the island. Rates from £531.

How to get there?