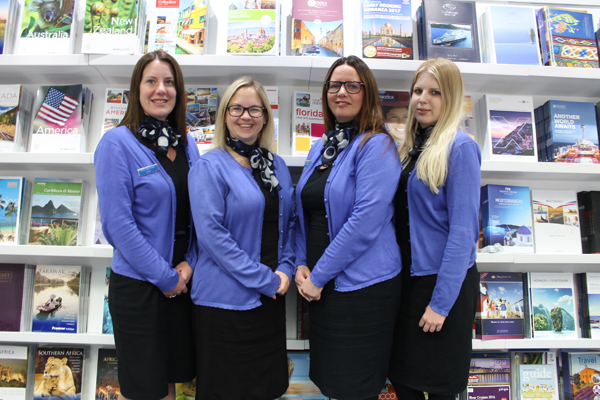 In the first of a new series, Hollie-Rae Merrick spends a day with manager Lisa Robinson and staff of Fred Olsen Travel’s best-performing shop, in Colchester

“I love making people’s dreams come true”, says Lisa. “A lot of our customers will have saved a long time for the holidays they’re booking with us, and if they’re excited, we get excited for them. I love the satisfaction you get when someone leaves the shop and you’ve sold them the right thing.”

Having worked as an agent for more than 30 years, and at Fred Olsen for the past nine, Lisa’s enthusiasm for the job is as strong as ever. And it’s easy to see why. Her store is Fred Olsen’s best-performing and has reported record sales since 2014.

Lisa puts the shop’s success down to a dedicated team that has been there a long time. “People recognise you and get comfortable with the faces in the shop,” she says.

“I believe that most of our recommendations are down to our customer service.”

Most of the shop’s customers are in their 50s or 60s, retired and with income to spend.

“We have great repeat business,” says Lisa. “We have one customer who has booked 43 holidays with us since 2007.” By chance, that customer called to book two Tauck holidays on the day Travel Weekly visited the store.

But Lisa adds that it has been a sad couple of years, as many customers have passed away.

The shop receives a lot of recommendations. People come in to book special-occasion holidays, as well as holidays for family members from as far away as Canada and Australia.

Lisa says Fred Olsen is “very different” from Colchester’s Thomson and Thomas Cook shops, which get a lot of business from young people.

The store specialises in tailor-made and long-haul holidays, with a huge proportion of enquiries and bookings for Australia, New Zealand and the US. It also takes plenty of short-haul and domestic bookings, such as Butlin’s or theatre breaks in London through SuperBreak.

Lisa says cruising accounts for 32% of business, although other Fred Olsen branches have a higher proportion.

“We’re switched on to cruise because our name is associated with the cruise line,” she adds. “Sometimes it’s a good thing and sometimes it’s a hindrance because customers have the idea that we sell only cruise. We work hard at marketing other holidays.”

Lisa says the branch works with lots of operators, but has the strongest relationships with If Only, Pure Luxury, Classic Collection, Premier Holidays, USAirtours, SuperBreak, First Class Holidays and Prestige Holidays.

“Interaction goes a long way,” she says. “We have a contact at USAirtours who Claire [assistant manager] went on an educational with, so since then, we have a good relationship.

“People such as Stacy Caunce at Pure Luxury are brilliant because we can ring her and nothing is ever too much trouble.

“We get reps coming out to see us quite often. Some shops might see that as a bit of a hindrance, but we think it’s really important, and make time for everyone that comes in.”

Like most agencies, the Colchester store hasn’t been immune to the impact recent events around the world have had on travel.

“We have people coming in concerned about terrorist attacks,” says Lisa. “Recently, we had people come in who hadn’t booked with us, but wanted our advice on Turkey.

“Places like Egypt and Turkey aren’t selling, but because we sell such a wide range of destinations, we can recommend other options.” But one bugbear that doesn’t go away is customers that come in and ask us for advice, then book direct online, Lisa adds.

“It happens more frequently than we’d like it to,” she says. “An example of that is after I did an amazing fam trip to South Africa with Premier Holidays. I came back buzzing and eager to sell the destination. Within a couple of months, I did two quotes for people – and both of them went elsewhere and booked.

“We’ve thought about introducing a service charge. If it’s a genuine quote or enquiry, it would work. But then a lot of people would be willing to pay the fee, take the advice and then save money booking elsewhere. It’s a hard one.”

I’ve worked at Fred Olsen for…
Nine years, but before that I worked at the multiples. I love the freedom you get working at an independent agency because there is no pressure to sell certain products and you can just fit the right customer to the right holiday.

When I was younger I wanted to be…
In the army. I went to a careers office with my dad to look for advice, and ended up seeing someone advertising an apprenticeship at Thomas Cook. I started there when I was 17.

I love booking…
Honeymoons and weddings. I also love selling Australia and New Zealand, as well as New York because that’s where I got married.

I’ve worked at Fred Olsen for…12 years. I’ve worked for multiples and started as an apprentice.

When I was younger I wanted to be…
An airline pilot or to go into hotel management.

I love booking…
Cruise and Las Vegas, as it is often for a special occasion.

The ladies working in this branch can reel off their clients’ names quicker than I can name Barbra Streisand songs (and that’s saying something).

It was clear how important it is for them to build a rapport with their clients. They don’t just want to book their holidays, they genuinely care about their customers. Assistant manager Claire even spent three months putting together a tailor-made itinerary to Madagascar – a new destination for the branch.

Lisa said how sad it was when older customers pass away, but she remembers each of them by name. The same applies to customers that have moved away from Colchester.