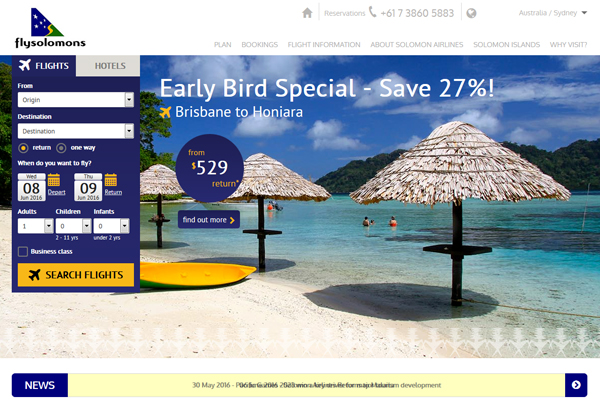 An unspecified government row has forced Solomon Airlines to abruptly suspend all services.

The dispute is reported locally to be the result of millions of dollars of unpaid government arrears which has compromised the airline’s operations.

The decision by the national carrier of the South Pacific archipelago to the east of Papua New Guinea means that all flights were grounded from today (Tuesday).

The airline’s international network from the islands’ capital of Honiara includes Brisbane in Australia, Nadi in Fiji and Port Vila in Vanauatu, plus 24 domestic destinations.

The decision has had immediate impact on the airline’s eight weekly services between Brisbane and Honiara, flights to and from Nadi, Fiji and Port Vila, Vanuatu, and all domestic services within the Solomon Islands.

Chief executive Ron Sumsum said this decision, due to a dispute with the Solomon Islands’ government, had not been taken lightly.

“This decision also affects services operated by us to our codeshare partners and services provided to all other airlines in our capacity as ground handling agents,” he said.

“I am confident the Solomon Islands’ government will address the situation in a very short time.”

Apologising for the disruption to services, Sumsum said he was hopeful the airline would return to full operation as soon as possible.