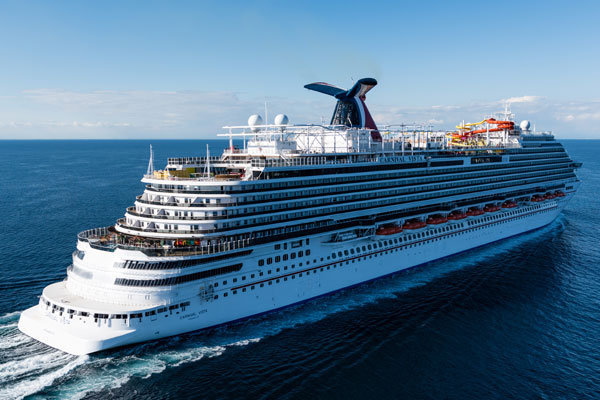 Harmony of the Seas has grabbed the headlines recently, but it’s not the only new ship worth knowing about, finds the Travel Weekly team.

When I was younger, I used to pretend my bike was a horse: I would race down the road on a bright pink bike, but in my mind I was riding a stallion, galloping to the finish line of the Grand National.

I returned to that happy place as I pedalled around an 800ft track on the top deck of Carnival Vista, 150ft above the sea. The SkyRide is the standout feature on board Carnival Cruise Line’s newest ship, although adrenaline junkies will also enjoy the line’s largest Waterworks, which features two waterslides, including a jazzy new Kaleid‑O‑Slide. 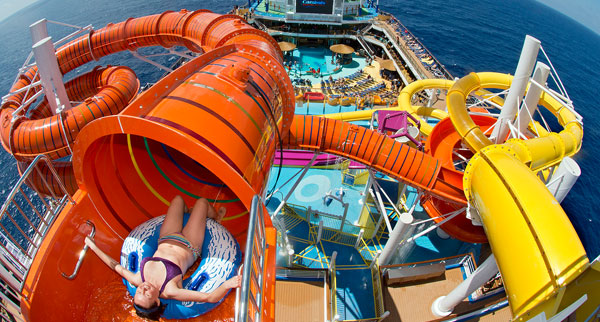 There’s a splash area for younger fun-seekers and the excitement continues in kids’ club Camp Ocean. Carnival’s partnership with Seuss Enterprises means children can meet Thing 1 and 2, and even Dr Seuss himself, at a Green Eggs and Ham breakfast (€5).

While the children play, adults wanting a slice of heaven – in the form of pure peace and quiet – can take their choice from the two-deck Cloud 9 spa, which features the line’s first infrared sauna and Turkish bath, or the adult-only Serenity Deck, where guests have to be 21 and over.

My favourite restaurant was Ji Ji Asian Kitchen (it may even be my favourite at sea), but new dining option the Seafood Shack is also a hit, serving lobster BLTs, oysters and good old fish and chips for guests dining alfresco by the pool at the back of the ship. The Seafood Shack also prepares fresh fish bought in port each day to any restaurant on board, if pre-ordered that morning (priced by the pound at the market).

Other foodie favourites brought over from the rest of the fleet include Bonsai Sushi, Guy’s Burger Joint and Italian restaurant Cucina del Capitano. 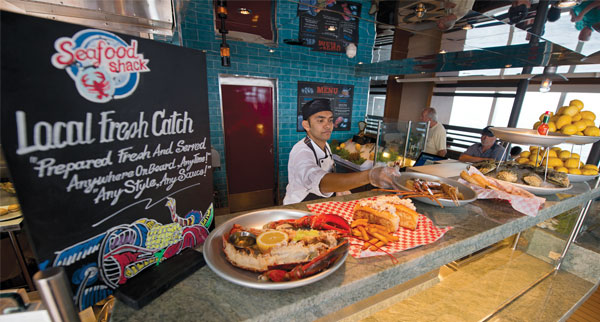 Thirsty guests can sup a pint from the ship’s own brewery – the first of its kind at sea.

Another first is the Imax cinema – it’s a wonder that one has not been put on a ship before. The screen is massive, showing new releases as they hit cinemas around the world. I was treated to a preview of The Jungle Book and was eager to return for another showing.

The Havana Cabana staterooms are as cool as it gets on this ship: stylish and exclusive, they’re off-limits to under-12s, and guests get private access to the Havana pool until 5pm. Families, meanwhile, have been snapping up Family Harbor cabins, which have access to a private lounge.

The 3,936-passenger Carnival Vista marks Carnival Cruise Line’s first return to Europe since 2013: the ship will remain in European waters until October, when it moves stateside, but the line has hinted at a return in 2018 with its next new ship, currently known as Vista 2.

Book it: An eight-night cruise on Carnival Vista costs from £549 cruise-only, based on a round‑trip sailing departing August 26 from Barcelona, calling at Messina, Naples, Rome and Livorno, Italy; Marseille, France; and Palma, Majorca. Guests receive $100 onboard credit.

Koningsdam is not only Holland America Line’s first new ship in six years but is also the start of something different.

HAL has always been known as a traditional line and while this new addition is definitely charming and features favourite elements from other ships, it’s a far cry from what past passengers will be used to.

Koningsdam, the first of two planned Pinnacle Class ships (the second will be launched in 2018) is modern, light and airy, unlike the darker woods and dramatic decor used on sister ships. Previous features have been made bigger and better, but there are many new venues to attract new customers, which the line’s president, Orlando Ashford, has said is key to moving away from “recultivating repeat guests”.

Sel De Mer serves à la carte dishes such as oysters and bouillabaisse (at a fee, unlike the other two additions), while the Grand Dutch Cafe is a nice nod to the line’s Dutch heritage. 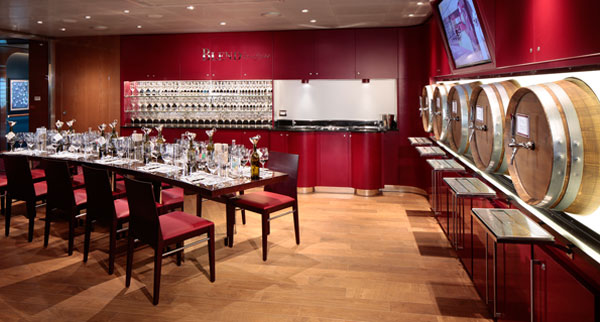 The Culinary Arts Center hosts cooking classes on other ships, but on Koningsdam it doubles as an evening dining room, costing $29, with a fresh, farm-to-table concept. For wine lovers, the new Blend experience allows guests to taste, mix and match five red wines to create their own blend. It’s pricey – $129 or $179 per couple – but HAL claims the wines used sell for up to $80.

Koningsdam has entertainment by the bucket-load: a music theme runs throughout, from partnerships with Billboard Onboard and Lincoln Center, to the paintings and art installations dotted around the ship. I let loose on the Queen’s Lounge dancefloor while resident band BB King’s All Stars proved to be the best I’ve seen at sea – a crowd favourite.

But Koningsdam’s biggest feature is the World Stage, where a 270-degree wrap-around screen means there isn’t a bad seat in the house. The screens bring the show to life and the concept works well. The only downside was that the full set of screens weren’t fully used in every show I saw during my short sailing. 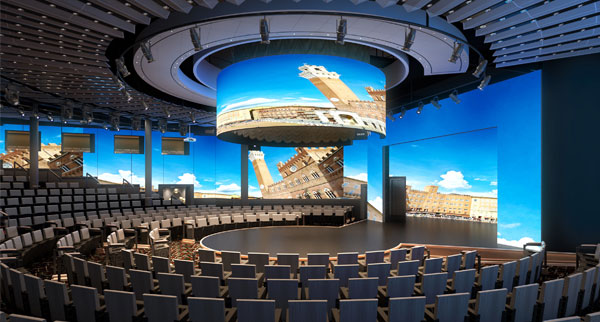 Koningsdam represents a fresh approach, far from the stereotype of a stuffy ship, but it’s the new cabin categories that will really entice a new audience. The vessel is the first in HAL’s 13-ship fleet to feature single staterooms and family cabins. There are 12 sizeable solo oceanview cabins, plus 32 family oceanview cabins sleeping up to five, with two bathrooms (one with a smaller bathtub and shower for tots), and though the cabins themselves aren’t massive, extra beds come in the form of a sofabed and pullman folding out of the ceiling.

Book it: Holland America Line offers a seven-night Norse Legend cruise on Koningsdam departing July 10, priced at £719 cruise-only for an inside stateroom; flight-inclusive prices from £969. The cruise is a round‑trip from Amsterdam calling at Eidfjord, Bergen, Geiranger and Alesund.

Looking at the ocean while sipping a daiquiri in the hot tub, it would be hard to feel more decadent – or smug, for that matter. Yet sitting on the terrace in the newly named Sanctum Spa – a real highlight of the upgrades made to Azamara Journey during a drydock refurbishment in the Bahamas in January – it feels in keeping with the luxurious surroundings.

Cruise line bosses have kept the cost of upgrading Journey and sister ship Azamara Quest under wraps, but big changes are visible across the ship in the light, contemporary decor, new luxury carpets and soft furnishings in cream, coffee and earth tones. Standout features such as the winding staircase in the lobby and painted ceiling in the Drawing Room remain, but overall the ship feels lighter and more 21st century. 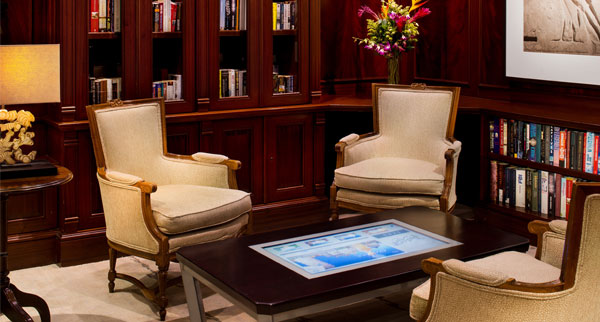 Richard Twynam, Azamara Club Cruises’ UK and Ireland managing director, says: “When looking at our guest experience, we felt our ships needed to be brought up to the same standard as our outstanding Land Discoveries excursions. We’ve paid close attention to every detail: from stunning new public areas to luxurious staterooms and suites, no corner of the ship remains untouched.”

Two spa suites have been added, featuring rain showers and an outdoor soaking tub. These huge rooms are the most luxurious on board, with free entry to the adjacent Sanctum Spa – connected by private corridor – and direct access to the spa terrace with thalassotherapy whirlpool, luxury loungers and waiter service.

Guests also receive a complimentary ‘Nights in Private Places’ package (usual cost £270), including a private butler, champagne, dinner cooked on a hot-stone grill, plus a bed ‘under the stars’ and breakfast in the morning.

All staterooms and suites have been refreshed with new beds, furniture and fittings, with light fabrics and cream decor. Continental Suites now have built-in TVs, while suites also have new furniture and bathrooms, and half now feature large showers instead of baths in response to guest feedback.

The Patio, formerly the Pool Grill, has had the biggest and most noticeable upgrade: it has been expanded with new lighting and ceilings to offer refined poolside dining in the evening more akin to the restaurants inside, with waiters, tablecloths and candles, and the added bonus of an ocean backdrop. 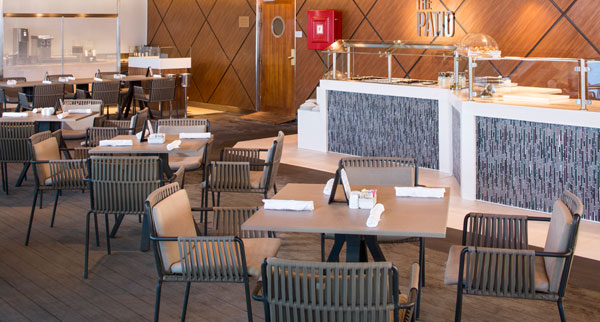 During the day, The Patio serves fast-food style meals, with a self-service appetiser bar and frozen yoghurt station.

Other culinary changes include a tapas bar in the newly named Living Room (previously the Looking Glass Lounge), while Mosaic cafe and the Casino bar, now Spirits, have been upgraded.

Twynam adds: “Guest satisfaction levels on the transformed ships are exceeding expectations and we are incredibly excited to show future guests the changes we have made.”

Book it: Prices for a seven-night Tuscany & Italy Riviera Voyage on Azamara Journey start at £1,249 cruise-only for a September 23 departure, or from £1,719 with flights.