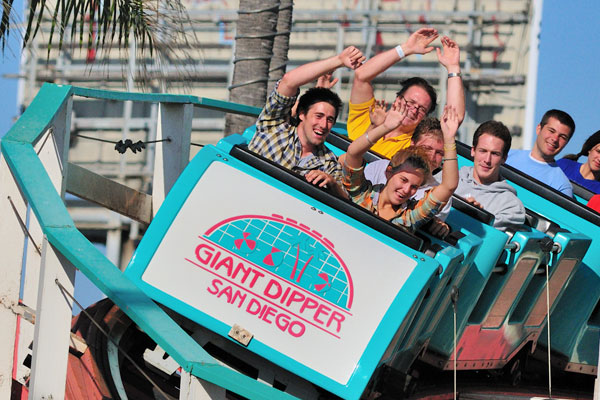 When it comes to big-name West Coast destinations, San Francisco and Los Angeles get the lion’s share of the limelight. But San Diego is hot on their heels.

California’s second-largest city by area, San Diego is just as easily accessible from the UK as its famous siblings, with a host of airlines including British Airways and Virgin Atlantic offering direct flights. San Diego’s restaurant and nightlife scene is booming, the beaches are breathtaking and the attractions abundant and diverse. Plus the highlights are pretty close together, so clients can pack a lot in, whether you sell them San Diego as a long weekend add-on to a larger itinerary or make it their Californian casa. 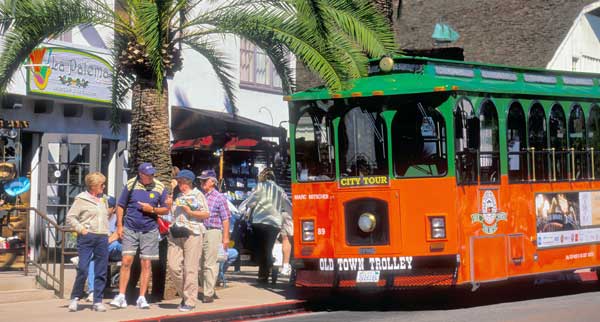 Why go: Those who want to step out of their hotel lobby and straight into the action should bag digs in downtown. Visitors can explore on foot or take a seat on the hop-on, hop-off Old Town Trolley tour. Do Something Different offers a one-day pass for £28 for adults and £14 for children, with two-day passes from £45/£27.

What to do: Stroll along the waterfront promenade that hugs San Diego Bay, perhaps stopping to browse at the souvenir shops of Seaport Village, or ride the 19th-century carousel with its wood-carved horses. San Diego is a hub of US seafaring history, so to get up to speed on the whys and wherefores, visitors should check out the Maritime Museum of San Diego, which boasts two submarines and a tall ship. The neighbouring USS Midway Aircraft Carrier Museum features more than two dozen aircraft on its giant deck (adults £14, children £8 with Do Something Different).

Another must-do is the Hornblower Harbor Tour, which offers a view back to the city skyline, while taking in the outlying islands and Point Loma naval base.

Clients will also sail by Coronado Island, famed for its mile-and-a-half soft-sand beach and the whimsical Queen Anne revival-style Hotel Del Coronado, where

Marilyn Monroe’s Some Like it Hot was filmed. For those who fancy going back later to join the sunbathers and swimmers, a water taxi runs between Coronado and Seaport Village.

When it comes to dining out, downtown is brimming with independent restaurants run by ambitious young chefs eager to make their mark on San Diego’s thriving gourmet scene. One option is to head to the Little Italy area. As well as offering fine dining, or pasta like mamma used to make, this neighbourhood is full of atmosphere, and there’s a mini piazza with a fountain and al fresco dining.

Once you’ve lined your stomach, the Gaslamp Quarter is the place for a night of hedonistic pleasure. Innumerable bars and nightspots line the 16 blocks of restored and ornate Victorian buildings here. Once San Diego’s red-light district, this area is abuzz with bands and entertainers playing into the wee hours.

Where to stay: The newly refurbished, 436-room Westin San Diego offers amazing views from the rooms located on floors 10 to 25. Accommodation is spacious with pleasing pastel-coloured soft furnishings, while a pool deck offers more views of the bay. 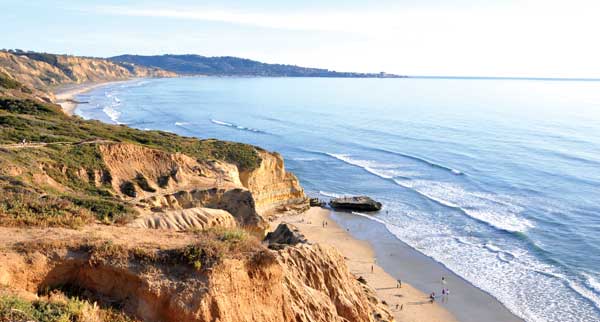 Why go: This chic, trendy neighbourhood with its broad avenues and delightful coves lies to the north of downtown San Diego, and is home to upscale galleries, boutiques, eateries and designer-wear stores. “La Jolla is a great walking town with that sophisticated southern California allure,” says Brendan MacDonagh of North America Travel Service.

Where to stay: For those seeking upscale luxury, the arts and crafts-style 170-room Lodge at Torrey Pines is sumptuous, and features the esteemed A R Valentien restaurant and an 18-hole Rees Jones-designed golf course. Five nights’ room only with flights and rental car in June cost from £1,595 per person with North America Travel Service. 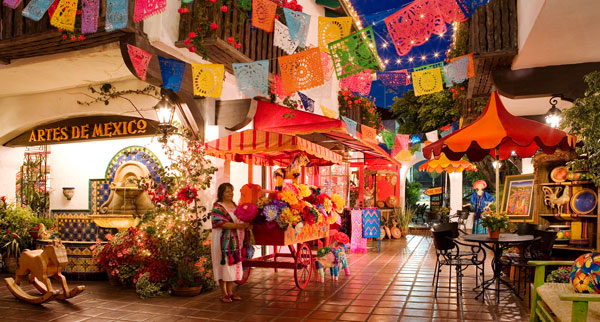 Why go: Lying north of downtown, Mission Valley, a lowland area through which the San Diego River flows, offers low-cost hotels that are perfectly placed for accessing hip neighbourhoods, hot retail centres and the green lung of the city, Balboa Park.

What to do: Idle away a Sunday morning at the Hillcrest Farmers’ Market taste-testing local produce, then check out the eclectic cafes, bric-a-brac and vintage stores of this funky neighbourhood. For a culture kick, Balboa Park, a 600-hectare swathe of greenbelt, has 15 museums to dip into including the Automotive, Air and Space, and Museum of Contemporary Art San Diego. It’s also home to a botanical garden and San Diego Zoo.

To the east of Balboa Park is another up-and-coming neighbourhood, North Park, with a trendy mix of one-of-a-kind shops and micro-breweries.

Another selling point for Mission Valley is its shopping malls. Westfield Mission Valley and Fashion Valley are packed with brand and department stores including Bloomingdale’s, Macy’s, Apple and Foot Locker.

Where to stay: The motel-style Handlery Hotel has a family-friendly atmosphere and its 217 rooms edge a pool area dotted with palm trees. Travel 2 senior product manager for the Americas and Caribbean Ross Sinclair says: “The Handlery offers free transportation to the zoo, SeaWorld and Old Town, complimentary breakfast for two people per room, and a car parking space, so no expensive car park charges.” 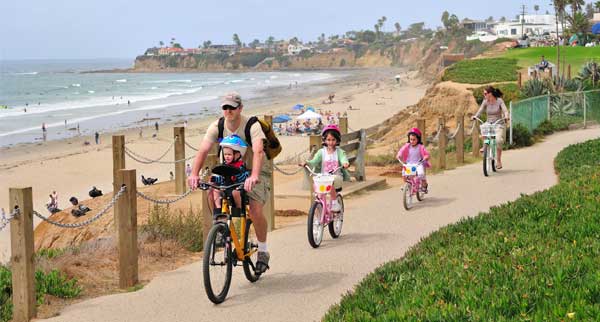 Why go: If clients love being close to water and want to get a taste of the Californian beach vibe, then suggest Mission Bay. With a laid-back feel, this inner harbour, made up of bays and islands secluded from the ocean, is the perfect place for chilling out in between seeing the city’s sights.

What to do: The historic Old Town San Diego is just a few minutes’ drive from Mission Bay. The streets are lined with adobe-style buildings from the 19th century, some of which have been turned into museums. The biggest draw, though, is the Mexican restaurants, where every meal is served fiesta-style, with music and dancing performed by staff wearing sombreros and boleros, while the margaritas flow.

Mission Bay is also the location of SeaWorld. One of the city’s best-known and most-visited attractions, this super-sized marine park also boasts rides and shows (seven-day tickets start at £56 through Attraction World).

For the ultimate California seaside town experience, Pacific Beach is a few miles to the north. All surf shops, retro burger bars, rustic beach houses and with a pier, it’s the ideal spot to rub shoulders with hippies, hipsters and surfer dudes hanging out on the broad sand beach. Pacific Beach runs seamlessly into Mission Beach, which is home to the fabulous Belmont Park fun fair with its candy floss and hot dog stands, and the vintage, wooden Giant Dipper rollercoaster.

Where to stay: Set on a private island, Paradise Point Resort and Spa has 462 rooms grouped in five villages and a mile of sandy shoreline. Emily Morrison, product executive at Funway Holidays, says: “The tropical landscaping and beachfront bungalows give a real holiday vibe. Plus, guests can take out a paddle board, hop on a jetski or learn to sail.”

Pick up a Go San Diego card for entry to 45 attractions. A one-day pass starts at £60 with Attraction World.

Travel 2 offers seven nights’ B&B at the three-star Handlery Hotel from £1,039, with flights from London; valid for travel between November 1 and December 12.
travel2.com

Funway Holidays has five nights at Paradise Point Resort and Spa from £1,155, based on two sharing a Lanai Garden room, with Virgin Atlantic flights from Heathrow departing October 20.
funway4agents.co.uk

Gold Medal offers seven nights’ room-only at the Westin San Diego in a Deluxe King City View room from £1,599, including American Airlines flights from Heathrow, for travel between September 5 and October 17.
goldmedal.co.uk